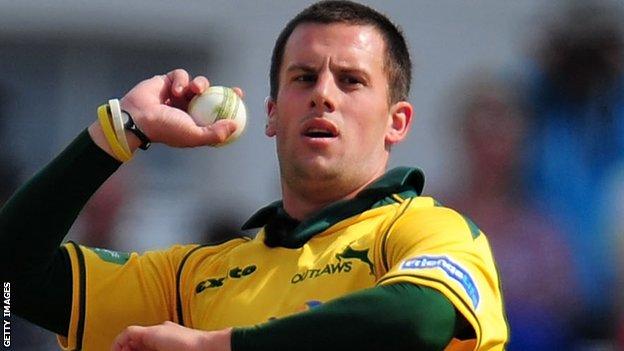 Only four players reached double figures in the hosts' 96 all out, Wayne White and Ramnaresh Sarwan making 13.

Notts eased home on 98-4 with seven overs remaining, Michael Lumb unbeaten on 25 and James Taylor 16 not out.

Taylor, who scored his runs off six deliveries and won the game with three successive fours.

The visitors did lose early wickets in their run chase to slip to 29-2 with Matthew Hoggard (2-25) accounting for Alex Hales, who was named in the this week, and Riki Wessels.

Robert Taylor, making his T20 debut for for the three-time champions, bowled Adam Voges for 21, while Samit Patel made 17.

Earlier, Josh Cobb was the first wicket to fall as he was deceived by a Pattinson slower delivery a ball after hitting two successive fours, before the same man trapped Jacques du Toit lbw for 11.

Mullaney got rid of Matthew Boyce and Sarwen in successive overs, both caught and bowled, while Kadeer Ali holed out to Wessels.

Abdul Razzaq went lbw in the next over for five, as he became a 70th wicket in the competition for Samit Patel (2-20).

White hit Patel for the only six of the innings in the 14th over, but then played on as the England one-day player followed up with a quicker ball.

Mullaney picked up his fourth wicket and returned his best figures in the competition, as Taylor was caught at mid-wicket by Voges.

Voges (2-6) than wrapped up the innings, Claude Henderson was neatly caught by Patel over his shoulder, while Hoggard was last man out lbw for a golden duck.