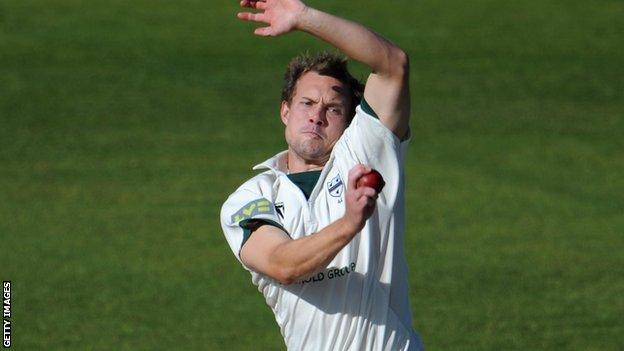 Worcestershire all-rounder Gareth Andrew admits that taking wickets has proved a major boost to his confidence as he battles to regain full fitness.

After undergoing winter knee surgery, Andrew has made a quiet return.

But a three-wicket haul in the CB40 slaughter of the Netherlands was followed by three more in last Sunday's FL t20 win over Gloucestershire.

"It was nice to get myself off and running in the competition," he told BBC Hereford & Worcester.

"I haven't bowled too much, so it was nice to get some wickets.

"But really I'm just glad to be back playing cricket and not still stuck in rehab.

"The things I had done to my knee are going to take more than six months to heal properly."

Andrew, 28, who took 52 wickets and scored almost 700 runs in first-class cricket in 2011, played through the knee injury over the county's final few games last summer as Worcestershire successfully fought to beat the drop to Division Two.

And it was originally feared that he could be missing for six months. But he came back ahead of schedule when last season's leading County Championship wicket taker Alan Richardson suffered a shoulder muscle injury against Surrey last month.

And, although Richardson has been missed, the county's performance in The Hague against the Netherlands, the group leaders, who had already won at New Road back in early May, showed he is not irreplacable.

In tandem with fellow seamers David Lucas, Jack Shantry and skipper Daryl Mitchell, Andrew took 3-9 in seven overs, Worcestershire making light of Richardson's absence as the home side were bowled out for just 57.

And his 3-20 at New Road last Sunday against a Gloucestershire side who had hammered them on the same track a week earlier has further helped restore spirits going into Friday evening's FL t20 return clash with Warwickshire at New Road (1730 BST).

Last Friday's opening game was rained off at Edgbaston and, following last Sunday's win over Gloucestershire, Wednesday night's trip to face Glamorgan in Cardiff was called off as a mark of respect following the tragic demise of Tom Maynard.

But Worcestershire's campaign now hots up, Friday's game being followed by another Twenty20 match less than 24 hours later when they are due to take on Northants at Wantage Road.