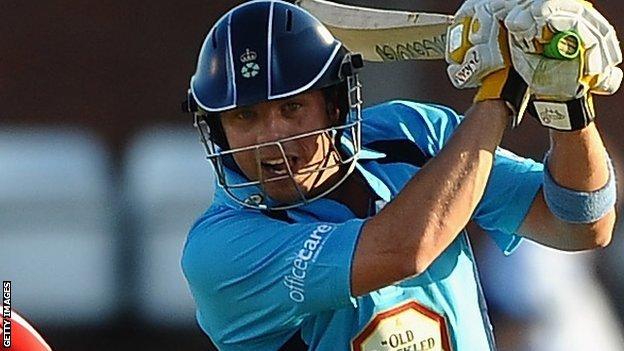 Derbyshire looked well placed on 74-2 as Durston hit six boundaries in his 31 off 16 balls, but the hosts lost their way and slipped to 82-5.

Chesney Hughes (16no) and Naved-ul-Hasan (19no) took them to 118-5 before rain intervened, and it proved enough.

Derbyshire were 17 runs ahead of the required rate when the umpires decided the rain was heavy enough to take the players off.

And they never returned to the field as Derbyshire won their opening game in this season's FL t20.

"I thought we batted really well and were probably over par. We thought 150 would be a good score.

"I don't think we bowled very well as a unit, although I don't think it was that easy to bowl because it got wet.

"It's been a miserable night because the weather's been pretty grim.

"We've got the advantage, in some ways, because we get the chance to put it right on Friday (at Leicestershire)."