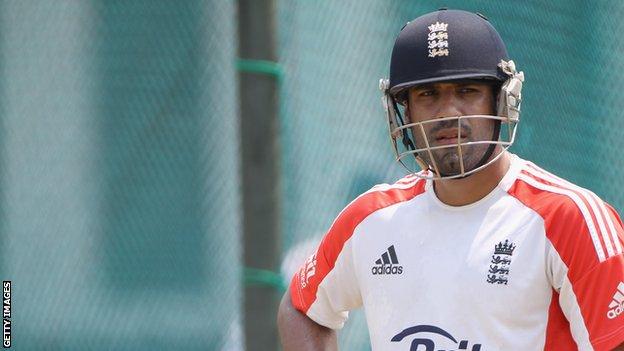 Ravi Bopara is hoping to take full advantage of Kevin Pietersen's retirement from one-day cricket and also prove his worth to the Test squad.

He has not featured for the Test side since August 2011 and missed the last one-day international with Pakistan.

He is now hoping to catch the eye on Saturday in the first of three one-day internationals against the West Indies.

"I haven't played a lot of cricket for England recently. So it's exciting for me, and I'm in good form," he said.

He added: "I do want to play for England, every opportunity I get.

"I have missed a lot of cricket. I've done a lot of 12th man, I know that for sure. I just want to get in and cement my place."

Bopara was at the head of the queue to fill England's number six position against the West Indies in this summer's Test series before a calf injury ruled him out of the first match last month.

In his absence, Jonny Bairstow was given a run but he is expected to be back at number four in the first 50-over match at Hampshire's Ageas Bowl.

"It's only recently I've started to get a few injuries," added Bopara.

"Before that, I very rarely missed games through injury - it's probably a sign of me getting old.

"It is annoying and it is frustrating."

West Indies coach Ottis Gibson is hoping the absence of Pietersen, coupled with the return of their own big-hitter Chris Gayle, can turn round their fortunes after a 2-0 Test series defeat.

"If you look at when Gayle has been away, we missed our best player," said Gibson.

"It is a big thing to lose your best player.

"KP has been good in the last two one-day series. They were trialling him at the top of the order, and it seemed it was going to work.

"It is going to be interesting, but I have been around the English system long enough to know there are a lot of good cricketers around."