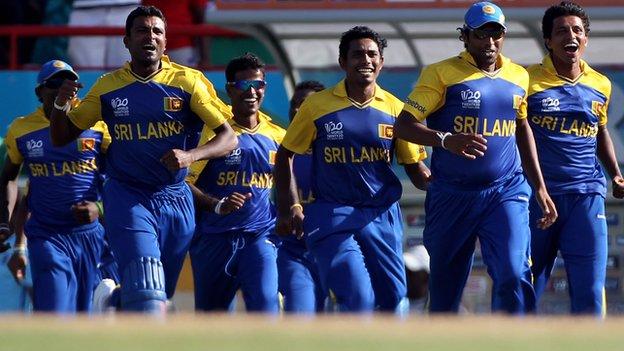 The SLC has been accused of favouring the newly established channel at the expense of state broadcasters and other private competitors.

But SLC President Upali Dharmadasa told BBC Sinhala service that the Carlton Sports Network (CSN) was offered the contract following a proper tender procedure. Dharmadasa added that they had been the sole bidder after the contract was advertised through local media and the SLC website.

"Nothing illegal or unlawful has taken place," he said.

Mr Dharmadasa added that though the CSN initially offered a relatively low price, it was increased after negotiations with the two parties.

"Do you want us not to grant the rights at all when only one company offers bids?," he asked.

"Then what about the fans?"

But former Sri Lanka captain Arjuna Ranatunga, who also previously held the post of SLC president, told BBC Sinhala that it is unprecedented in Sri Lanka's history of cricket that TV rights were granted for three consecutive years.

"It has been the practise that the rights were granted on a series-by-series basis not for very long periods," he said.

"At least the SLC should have advertised the amount of matches played in these three years and called for bids accordingly," added Ranatunga, who is currently an opposition MP.

Apart from a few years, it was state owned Sri Lanka Rupavahini Corporation (SLRC) that held the rights to broadcast cricket within Sri Lanka since the island won the World Cup in 1996.

Are we supposed to reject a company because it is an organisation owned by the president's sons?

SLRC chairman Mohan Samaranayake told the BBC that the state-owned broadcaster missed the advertisement placed by the SLC calling for bids to offer television rights for the next three years.

"Yes we will certainly lose a considerable income but I wouldn't say we will end up in debt as a result," he said.

"We will look into how our marketing and sports departments missed the newspaper advertisement and of course will continue bid for sports rights in future events," Samaranayake added.

Unlike the SLRC which has an island wide coverage, fans told the BBC that the CSN signals are still not clear in many parts of the country. However the SLC denies getting any such complaints.

The SLC president admitted that the CSN, registered little more than a year ago, is owned by the sons of President Mahinda Rajapaksa but rejected any suggestion that political influence had been a factor in the decision.

"Are we supposed to reject a company because it is an organisation owned by the president's sons," Dharmadasa asked.

The former head of Transparency International Sri Lanka, Krishantha Weliamuna, meanwhile, told BBC Sinhala that the state could have earned at least 3000 million SLR for broadcasting the international cricket matches played in Sri Lanka during the next three years.

"In my opinion, 125 million SLR could be earned in one tournament," said Mr Weliamuna who is also a senior lawyer.

"I would kindly ask you to check the FTP and how many international teams are to visit Sri Lanka during the next three years," he said.

The head of SLC also denied the allegation by Mr Weliamuna that Nishantha Ranatunga's dual role as the Secretary of the SLC and the CEO of the CSN channel amounts to serious conflict of interest.

"How can it be a conflict of interest as it was the sports minister himself who allowed Nishantha Ranatunga to contest for while he was an official at the CSN?," he questioned.