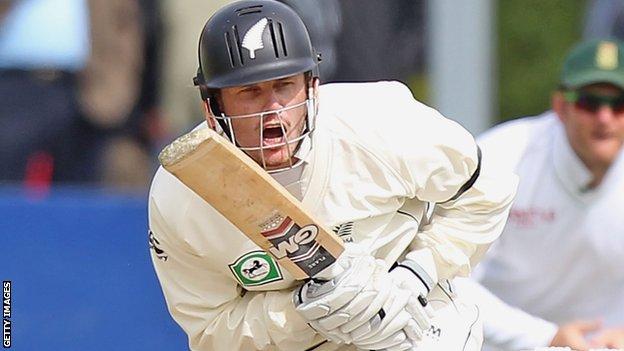 New Zealand batman Rob Nicol is to join Gloucestershire for the final two months of the season.

The 29-year-old replaces fellow Kiwi Kane Williamson, who will be on international duty from next week.

"We had to pull him out of the beer tent at Trent Bridge back when I was touring with the New Zealand side," remembers Bracewell.

"We started running out of players so I had to sober him up and get him out on the field.

"He was over here playing league cricket at the time and he's worked his way up to be an international player, which is a great achievement."

However, Nicol will not be available to join the club until mid-July.

With Williamson departing after the games against Worcestershire and Northants on Sunday and Friday next week, it means Muttiah Muralitharan will be Gloucestershire's only overseas player for most of the group stage of the T20 competition.

Nicol has hit two centuries in nine one-day internationals and averages almost 49 and he has also won two Test caps for his country.

He will be on standby for New Zealand's tour to the West Indies and will then link up with Gloucestershire midway through the Cheltenham cricket festival next month.