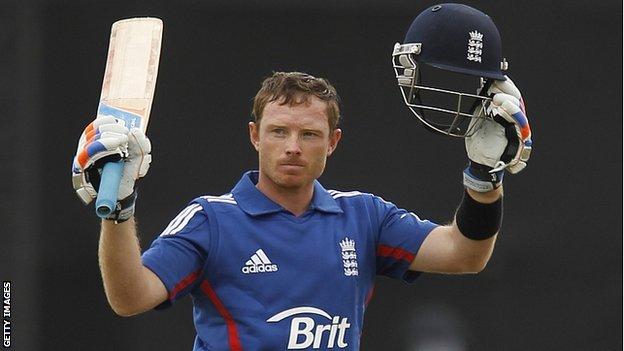 Ian Bell answered his doubters with a superb hundred as England crushed West Indies in a rain-affected first one-day international at the Rose Bowl.

Bell, recalled to open the batting after Kevin Pietersen's retirement, struck 126 in England's 288-6.

But a flurry of wickets either side of a rain delay settled things as England bowled out the tourists for 172 to claim a 114-run Duckworth-Lewis win.

The decision to bring back Bell as an opener raised a few eyebrows given his modest record of only one century in 108 one-day innings and a strike rate in the mid-70s.

Back with a bang

Ian Bell's only previous one-day international century came against India at the Rose Bowl in August 2007, an unbeaten 126 batting at number three in a 104-run victory

But after the early loss of captain Alastair Cook, he led from the front with a supremely confident innings that could mark the turning point of his one-day career.

Passed fit on the morning of the match after receiving 10 stitches to a chin wound suffered in the nets, Bell scored 12 fours and a six in a 117-ball knock founded on impeccable shot selection and timing.

And by the time he succumbed to a Dwayne Bravo slower ball in the 40th over, England were well on their way to a healthy total.

Such an outcome looked unlikely after the Windies won the toss on a cold, breezy day and Ravi Rampaul had Cook caught behind off the third ball of the day.

Had Trott been given out to a marginal lbw appeal two balls later, the innings could have taken on a very different complexion.

Instead, with Trott providing solid support, Bell set about carrying the fight to the opposition, choosing the sixth over of the innings to launch a calculated assault on paceman Andre Russell.

He smashed a length delivery back over the bowler's head for six, then struck three fours off the next four balls via a cut, pull and cover drive.

Trott made 42 with only three boundaries before he edged an attempted cut off Sunil Narine into Denesh Ramdin's gloves.

Ravi Bopara fell in similar fashion for eight to the occasional off-spin of Marlon Samuels, and Eoin Morgan played on to the same bowler after a breezy 21, in which he appeared to have abandoned his trademark bobbing trigger movement in favour a stiller stance.

After reaching his 50 off 43 balls, Bell became more inventive in his strokeplay, finding the boundary via a reverse paddle and pulling Darren Sammy in front of square for four.

"Credit must be given to England for the way in which they played. There are some doubts over England at this level in limited-overs cricket, but today they have sent a message to West Indies, and the tourists must go back to the drawing board."

Bell's hundred arrived in the 33rd over of the innings and, as he motored into the 120s, Robin Smith's record England one-day score of 167 looked under threat.

But, Bravo is nothing if not canny and he deceived England's centurion with a slow full toss which Bell could only top-edge to Ramdin.

Tim Bresnan was run out for 21 as England's run rate began to stall, but Craig Kieswetter (38 not out) and Stuart Broad (22 not out) plundered 33 off the last three overs to give the total a late boost.

The tourists, deprived of the services of explosive opener Chris Gayle due to a shin injury, lost an early wicket when Lendl Simmons chopped Anderson onto his own stumps.

At the other end, Smith looked every inch the modern batsman, favouring raw power over footwork as he pulled Finn for a huge six. He brought up his fifty by depositing a Broad delivery into the stands as the Windies raced to 86-1 off 14 overs.

But Bresnan came to England's rescue as Smith was too early on a pull shot and the edge was pouched by Kieswetter.

The Yorkshire all-rounder followed up with the wicket of Ramdin to a ball that nipped back into the wicketkeeper's pads and suddenly England were back on top.

With light rain starting to fall, Finn trapped Bravo leg before with a ball that straightened, and Kieron Pollard fell to a brilliant diving catch by Morgan at point.

After a delay of just over an hour, England picked up where they left off as Samuels clipped Anderson to Graeme Swann.

The England off-spinner then removed skipper Darren Sammy before Russell looped a catch to point.

Swann had Rampaul caught in the deep and Bresnan finished things off with his fourth wicket when Narine was caught by a diving Kieswetter.

Darren Bravo was forced to bat at number nine due to a groin injury, while Russell required treatment to a shoulder problem at the crease.

The duo, and Gayle, could be doubtful for the second one-dayer on Tuesday at The Oval.