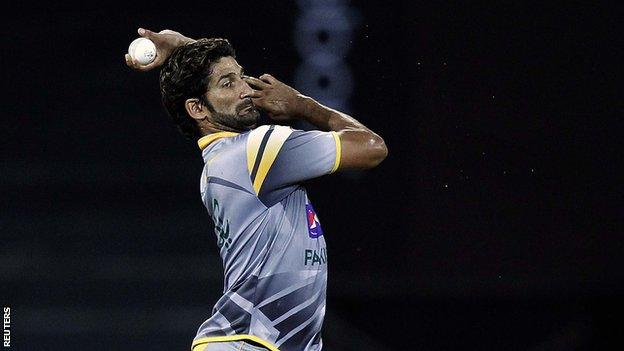 Worcestershire's hopes of a good run in the FL t20 have been hit by the delayed arrival of fast bowler Sohail Tanvir.

It was initially anticipated that the Pakistan paceman, a stand-in for compatriot Saeed Ajmal, would arrive in England early next week.

But red tape issues mean he will not be available until later in the month.

The county were forced to find a replacement when spin bowler Ajmal was picked to tour Sri Lanka between May and July, but Tanvir himself was then also called up by Pakistan for the Twenty20 and 50-over matches.

"After an unexpected, extended stay with the Pakistan national team for the one-day international matches, it was hoped that the final part of Sohail's visa application to visit the UK could be completed while in Sri Lanka.

"Unfortunately, this has not been the case. Sohail will now be travelling back to Pakistan on conclusion of the one-day series on Tuesday to complete the process," explained Leatherdale.

"It is expected that Sohail will then be able to join us early in the week commencing 25 June for our last five important group matches.

"We hope that he will make the same impact as he did in the two-match series against Sri Lanka, in which he won the man of the series."

Worcestershire's Friends Life t20 match against Warwickshire at Edgbaston on Friday night was washed out by rain with no play possible.