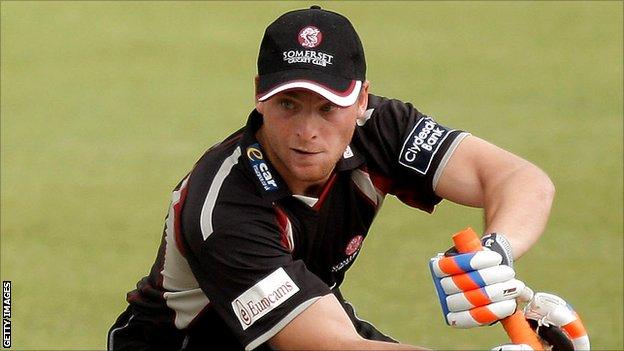 Jos Buttler's unbeaten 58 from 38 balls helped Somerset maintain their unbeaten start to the FL t20 with a five-wicket win over Northants at Taunton.

Cameron White (47no) and David Willey (30no) pushed Northants up to a total of 137-5, the pair putting on an unbeaten 52 for the sixth wicket.

Buttler lost partners regularly but saw the hosts home with a ball to spare.

Somerset were without South African duo Richard Levi and Albie Morkel because of their international commitments, but England international Buttler showed glimpses of his potential with an innings full of confidence and improvisation.

The 21-year-old, overlooked by the national team for their current one-day series against the West Indies, hit two unorthodox swept boundaries in the penultimate over as the hosts moved closer to a second group win.

The 2011 runners-up had on Wednesday but were a day later, as their match with Gloucestershire was rained off.

It was Northants' first action of the competition, having seen their home tie with on Thursday evening.

"We were probably a little bit off in most departments, and in a low scoring game, every little helps," all-rounder Cameron White told BBC Radio Northampton.

"Somerset were always five or ten runs ahead of the game, and Jos batted fantastically, so all credit to him.

"I like this competition - it's one I've really enjoyed with Somerset in the past. We'll regroup and push on to the next game."