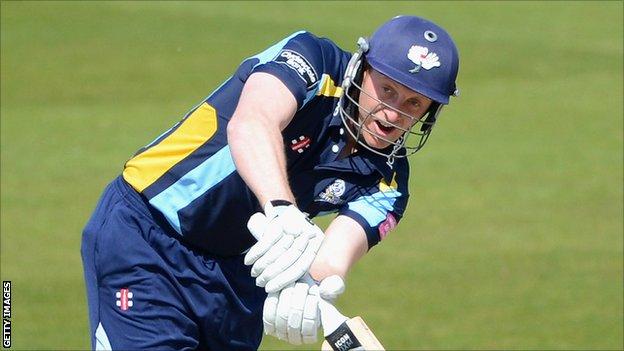 FL t20 champions Leicestershire continued their miserable start to the competition, losing to Yorkshire by 22 runs at Headingley.

The hosts posted 170-4 after winning the toss and choosing to bat.

Joshua Cobb (46) and Ramnaresh Sarwan (45) took up the run chase but Mitchell Starc (3-26) condemned the holders to a third defeat in as many matches.

Leicestershire's defence of their FL t20 crown started in miserable fashion on Tuesday, as they were bowled out for just 96 in their

The Foxes were then on Friday and are one of only three counties yet to register any points in this year's competition.

Yorkshire, meanwhile, bounced back from their on Friday in style, rarely looking in danger of suffering a second consecutive group defeat.

The first-wicket partnership of 122 between Gale and Jaques eclipsed Yorkshire's previous best opening stand in the competition - 104 by Gale and Jacques Rudolph, ironically against Leicestershire, at Grace Road in 2009.