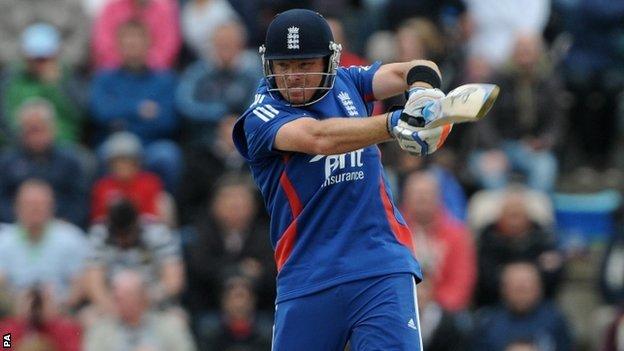 England batsman Ian Bell said he hoped his match-winning century against West Indies would mark a turning point in his one-day international career.

Playing as an opener, Bell hit 126 as England beat West Indies by 114 runs in a rain-affected match at the Rose Bowl.

"Today was my day and I really enjoyed it," Bell told BBC Test Match Special.

"I'm a better player now than last time I was at the top of the order. Hopefully I can take my Test match form into one-day cricket now."

Bell was dropped from the England one-day squad earlier this year after scoring only one century in 108 innings.

Back with a bang

Ian Bell's only previous one-day international century came against India at the Rose Bowl in August 2007, an unbeaten 126 batting at number three in a 104-run victory

Recalled to open the batting following Kevin Pietersen's retirement from limited-overs international cricket, he equalled his highest one-day score to lead England to 288-6 from their 50 overs.

It was a fantastic end to 24 hours of contrasting emotion for the Warwickshire man.

In the nets on Friday he pulled a ball onto his chin and had to go to hospital for stitches and an X-ray on his jaw.

"It had gone quite deep to the bone, and there were a few layers of stitches - and then the 10 [on the surface].

"It was weird, because it hurt more by my ear really rather than where it actually hit me.

"Then when the blood was coming down, I didn't really know where from - so it was a strange one really."

Once out in the middle, though, Bell had only one scare - on 23, when he admits he felt a thin edge behind only for umpire Richard Kettleborough to give him not out off Ravi Rampaul.

It was a rare blip in an innings in which Bell played to his strengths on what was a good pitch.

"I felt I was in pretty good nick by the end of the Test series, so it was nice to go at the top of the order and play some proper cricket shots.

"Probably in the past, I've tried to hit the ball too hard sometimes and lose my shape, whereas today I did exactly as I'd play a Test match, sticking to the shots I know well.

"Obviously, there's a bit more intent in one-day mode. But I didn't try to slog - which probably in the past I've been guilty of doing."

Tim Bresnan was the pick of the England bowlers with 4-34, but captain Alastair Cook was in no doubt as to the star of the show.

"It was just a brilliant innings from Ian and that's what we need at the top of the order," Cook said.

"That's why we pick people with good technique to try to get through the new ball and play an innings like Bell did. I think he has improved as a player - he has worked his socks off and is getting the rewards.

"We all know what a quality player he is and he has done well in Test matches over the last couple of years, but I think now we will really see the best of him."

The West Indies were weakened by the absence of Chris Gayle due to a shin problem, while Darren Bravo and Andre Russell both suffered injuries during the match.

But captain Darren Sammy said he hoped to have all three available for the second of three matches at The Oval on Tuesday.