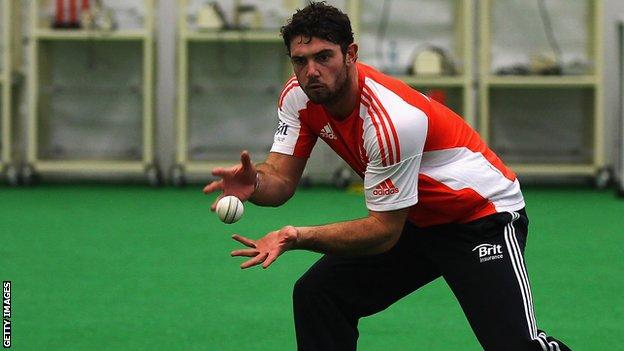 Tributes have been paid to Surrey cricketer Tom Maynard, who has died after being struck by a London Underground train.

The 23-year-old, from Cardiff, had played for England Lions and was tipped to graduate to full England honours.

Surrey chairman Richard Thompson said: "To lose anybody at such a young age is an utterly senseless tragedy."

England and Wales Cricket Board chairman Giles Clarke said: "Tom was a player of enormous potential."

The batsman, who played for his county in their Twenty20 game against Kent on Sunday, died following the incident which involved a District Line train at Wimbledon station on Monday.

Police said a man matching Maynard's description ran away after a car being driven "erratically" was stopped shortly before.

Maynard, the son of former England batsman Matthew, began his career at Glamorgan before joining Surrey at the start of last season. He scored 2,384 runs at an average of almost 33 in his 48 first-class matches - with a top score of 143.

Thompson added: "Tom was a prodigiously talented young batsman who had made an incredible start to his career and was clearly destined for far greater things.

"The impact Tom made in such a short period of time for Surrey CCC spoke for itself. There is a profound sense of loss at the passing of Tom."

A statement from Glamorgan CCC said they were "deeply saddened to hear of the tragic death of Tom Maynard" and the club's thoughts were with his family.

It added: "Most of our playing and coaching staff were close friends of Tom and understandably are still trying to come to terms with this sad news."

Ex-England all-rounder Andrew Flintoff: "Tragic news that a great lad, Tom Maynard, is no longer with us. All my thoughts are with his family at this awful time x x"

Former England seamer Matthew Hoggard: "Can't believe the news about Tom Maynard !!!! Life can be so cruel! Thoughts go out to his family!! Top bloke much talent! R.I.P"

Durham all-rounder Paul Collingwood: "The world has lost a true character that loved life and a hugely talented cricketer. My thoughts go out to the Maynard family. RIP Tom."

Former England bowler Darren Gough: "Terrible news, Tom a fantastic athlete, great person who had so much to look forward too, I'm devastated for all that knew him."

"He had the world at his feet. I played with his old man when he played for England and Tom was very much on that pathway," he said.

"In many ways he was very similar to Matthew. He was an incredibly talented cricketer. He played for the Lions in the winter. He impressed all the coaches there.

"They liked him as a person and as a player and to have his life cut short in this way is an absolute tragedy."

Chris Tremlett said: "RIP Tom Maynard. Such a sad loss to everyone that knew him and thoughts are with his family. Absolutely gutted. Will be missed xx."

Wales rugby captain Sam Warburton, who attended Whitchurch High School at the same time as Maynard, said: "Thoughts are with the family of Tom Maynard. Great cricketer, sportsperson and guy."