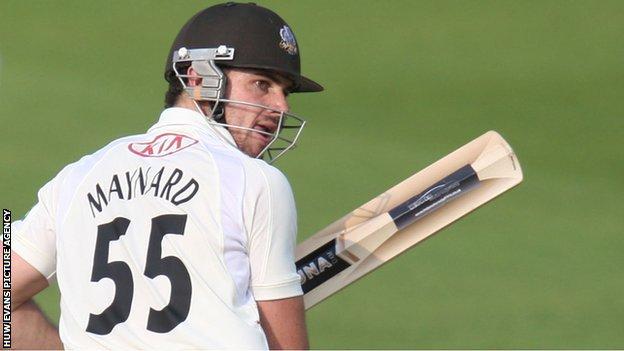 Glamorgan have postponed Wednesday's T20 game with Worcestershire as a mark of respect after the death of former player Tom Maynard.

Maynard, the son of ex-England player Matthew, died on Monday after being struck by a London Underground train.

The match has been rearranged for Tuesday, 3 July starting at 18:00 BST.

Club captain Mark Wallace had said before the postponement that the players might not be in the right mental frame of mind to play.

"I can't really see there being much appetite for play," Wallace told BBC Radio Wales.

The decision was made after a discussion between the players.

Wallace had said: "We inhabit a world as professional cricketers where we put a lot of importance on something that at the end of the day sometimes really doesn't matter that much, so I think this has put a lot of perspective into our lives."

Surrey, whom 23-year-old Maynard joined from Glamorgan at the beginning of last season, have postponed their t20 game against the Hampshire Royals at the Kia Oval on Wednesday.

And England and the West Indies wore black armbands as a mark of respect during Tuesday's one-day international at the Kia Oval.

Maynard, who played for his county in their Twenty20 game against Kent on Sunday, died following the incident which involved a District Line train at Wimbledon Park station on Monday.

Maynard scored 2,384 runs at an average of almost 33 in his 48 first-class matches - with a top score of 143 - had toured Bangladesh with England Lions and was part of the England Performance Programme.

He left Glamorgan in January 2011 to join Surrey following his father Matthew's departure from the Welsh county as director of cricket in 2010 after claiming his position had become "untenable".

A statement issued by Glamorgan CCC on Monday said everyone at the county was "deeply saddened to hear of the tragic death of Tom Maynard" and the club's thoughts were with his family.

It added: "Most of our playing and coaching staff were close friends of Tom and understandably are still trying to come to terms with this sad news."