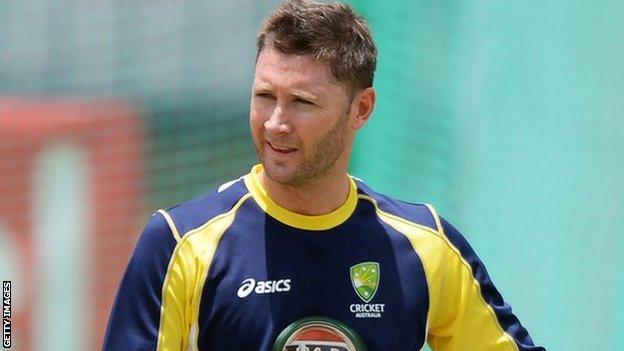 Australia have arrived on British soil with captain Michael Clarke saying they will have to be "at their best" to beat England in the one-day series.

It is the first Australian touring party since 1995 missing Ricky Ponting, who has been left out of the squad.

"We're the number one ranked team in the world but haven't been consistent as we would like," said Clarke.

"They've been playing some really good cricket against West Indies, so we are going to have to be at our best."

The ODI series is a best of five encounter, starting on Friday 29 June and squeezed into the middle of the visits of West Indies and South Africa.

Former captain Ponting, 37, was first left out of the one-day squad in February after scoring only 18 runs in five innings in the tri-series against India and Sri Lanka.

He admitted then that he was unlikely to feature in the format again and would be concentrating on Test cricket in the future.

"We all get older unfortunately, and there comes a time where you are not selected in teams any longer," added Clarke.

"Fortunately for us Ricky is still playing Test cricket and is a big part of our Test team - and next time we are here for the Ashes, I'm hoping he will be here with us."