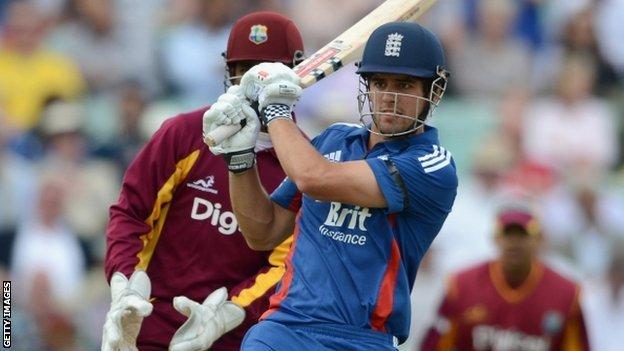 Captain Alastair Cook scored 112 as England cruised to an eight-wicket victory over West Indies to clinch the one-day series with a match to spare.

Put in to bat, the Windies failed to build on Chris Gayle's explosive 53.

Dwayne Bravo top-scored with 77 off 82 balls but the innings fizzled out with only 19 runs in the last five overs.

Their total never looked enough on a true pitch and in bright sunshine, and Cook and Bell gave a masterclass in how to chase down a modest target, picking up singles off most balls and putting away any wayward deliveries for four.

Cook was marginally the more aggressive, taking a particular liking to the off-spin of Sunil Narine, who he cracked for successive fours on either side of the wicket in racing to a 51-ball half-century.

England were scoring at more than six runs per over when Bell, a centurion in the first match at the Rose Bowl, gifted his wicket to Darren Sammy with a loose drive to cover.

Cook marched on to reach his fourth century since taking over as one-day captain a year ago - and the sixth by an England opener in successive one-day internationals.

With Trott playing his usual game of steady accumulation, Cook steamed to three figures off 114 balls.

After 12 fours, he bludgeoned his first six off opposite number Sammy over long-on before falling trying to repeat the shot and ballooning the ball up in the air.

That left Trott, who finished 43 not out, and Ravi Bopara to steer England to a victory that was even more comprehensive than their 114-run Duckworth-Lewis win in Saturday's series-opener at the Ageas Bowl.

"The bowlers set the tone this morning. A couple of times they got away from us but we held our nerve and we would have taken 240 as a target. It proved a pretty comfortable knock in the end."

The second contest began in sombre mood as The Oval remembered Surrey batsman Tom Maynard, who died on Monday after being struck by a London Underground train.

There was a minute's silence before the start and players from both teams wore black armbands.

"It's been a tricky 24 hours. The way the lads handled it and put a good performance together is a credit to group we have in there," said Cook, who barely celebrated reaching three figures.

"It was not a massive day for celebrations - cricket is important but it's not that important."

An England opener has scored a century in the last six ODIs, a record for any country:

He smashed Tim Bresnan for three huge sixes and James Anderson two, with one missile clattering into the scoreboard and another almost dislodging some tiles from the roof of one of the stands.

With Lendl Simmons hardly playing a shot at the other end, it was a one-man show and when Gayle reached his fifty off 41 balls, the Windies total was 59-0.

Gayle was stopped in his tracks when umpire Tony Hill took an age to adjudge him out lbw off Graeme Swann. The batsman immediately ordered a review, which appeared to show that that the ball struck pad before bat, but Gayle looked less than impressed as he reluctantly trudged away from the wicket.

The dangerman gone, England seized control with three quick wickets. Dwayne Smith was caught behind aiming a heave at Stuart Broad, Simmons was run out for a 50-ball 12 by a Cook direct hit and Marlon Samuels was caught in the deep for 13.

A rebuilding job was called for and the Windies found the men for the task in Bravo and Kieron Pollard. Watchful at first, then increasingly aggressive, they added 100 in 19 overs to set the tourists up for an imposing total.

Pollard top-edged Bresnan to Anderson to fall for 42, but Bravo kept up the momentum with Sammy, who scored 21 off 20 balls.

The tourists' innings rather petered out after the skipper's dismissal as Denesh Ramdin and Sunil Narine fell cheaply and Bravo was caught playing one shot too many.

Tino Best strained every sinew in a bid to emulate his Edgbaston Test heroics but mostly connected with thin air in scoring seven off 12 balls.

"We didn't score enough runs on a good wicket," said Sammy. "Cook played well, but at the end of the day, you need runs on the board to defend.

"In two games we have seen Englishmen get hundreds, but none of our batsmen have been able to do that.

"We didn't bowl consistent lines and lengths, England found it easy to move the ball around. We have to be more consistent in everything we do."