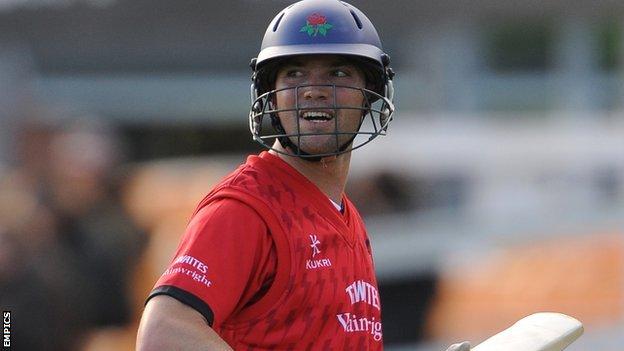 Leicestershire suffered their fourth successive FL t20 loss as they fell to an eight-wicket defeat by Lancashire at Old Trafford.

Matthew Boyce made an unbeaten 63 for the highest T20 score of his career and Abdul Razzaq hit 61 as Leicestershire, the 2011 champions, reached 179-4.

Steven Croft (41 not out) and Karl Brown (39 not out) guided the hosts to victory with an over to spare.

Leicestershire had lost their opening three T20 games - against Nottinghamshire, Lancashire and Yorkshire - but appeared on course for their first victory of the season with their highest total of the campaign so far.

Boyce made 63 off 38 balls, while Razzaq only needed 51 deliveries for his 61 before Wayne White added 19 off nine balls late on.

Glen Chapple produced a fine spell of bowling where he claimed 2-10, the most economical figures by a Lancashire bowler who has bowled their full quota of four overs in Twenty20 history.

The hosts made a bright start to their reply as Moore and Smith put on 75 in less than eight overs for the first wicket.

Each of the Lancashire batsmen scored quickly as their side reached 180-2 with six balls remaining to claim the win, their second against Leicestershire in this year's tournament.