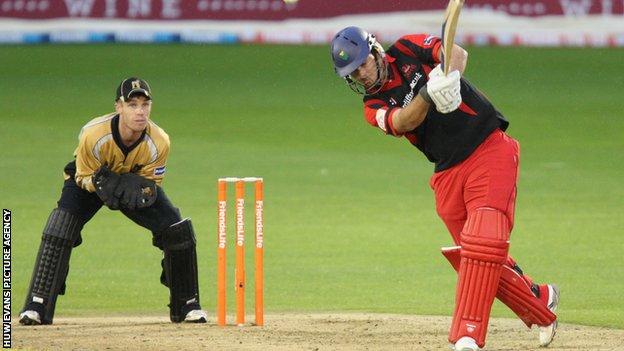 Glamorgan are getting ready to play their first game since the death of former team-mate Tom Maynard.

The Surrey batsman died after being hit by a tube train on Monday with the Dragons postponing their match against Worcestershire as a mark of respect.

And batsman Gareth Rees said it will be hard for the team to get back to cricket at Somerset on Friday evening.

"It's going to be very difficult. But with it being T20 it might make it a little bit be easier," he said.

"Because you have that short-term focus and it's different to four-day cricket where things might meander along.

"It's been extremely difficult. There are boys in that dressing room who played with Tom, played with Matt. Steve Watkin [Glamorgan bowling coach] is his uncle.

"Tom loved playing cricket and loved the banter. The best way to go out there is to enjoy as much as you can the games you are playing because life, as we have seen, is short."

So far the Dragons have three points for a win at home to Warwickshire and an abandonment at Northamptonshire.

Glamorgan are likely to name the same side that won by five runs under the Duckworth-Lewis Method in a rain-affected game against the Bears last Saturday.

The postponed game against the Royals has been rearranged for Tuesday 2 July at 18:00 BST.

The decision was made after a discussion between the players, many who played with him at Glamorgan until he moved to Surrey in January 2011.

BBC Radio Wales (medium wave) will broadcast a tribute to Tom Maynard on Friday from 17:05 BST before live coverage of Glamorgan's t20 match at Taunton.

Presenter Rob Phillips will be joined by guests Steve James and John Derrick, with contributions from Gareth Rees, Hugh Morris and Alec Stewart.