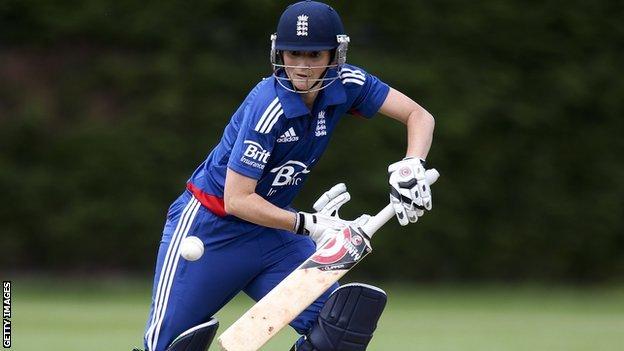 England's women warmed up for their one-day series against India by beating Ireland in a Twenty20 international.

Having lost the toss, captain Charlotte Edwards opened for England and anchored the innings, batting through the 20 overs for 72 not out from 61 balls.

Arran Brindle (29) helped them to 136-4 in their first summer international.

Ireland openers Clare Shillington (29) and Cecelia Joyce (16) added 47 but both fell to spinner Danni Wyatt as the Irish finished on 85-5, 51 runs short.

The Joyce twins had earlier combined to remove Lydia Greenway, with Cecelia taking a catch off Isobel's bowling.

Edwards said: "It was good to get out and play after the conditions have been against us for most of the week.

"We were a little bit rusty in the field, but that's understandable given we haven't had that much cricket due to the rain.

"I feel in good form, but credit to Ireland, they bowled really well up front."

India, who were beaten by the England Women's Academy side earlier in the day, now face Ireland in a Twenty20 international at Loughborough on Sunday, before England begin their limited-overs series against India with a T20 international at Canterbury on Tuesday.