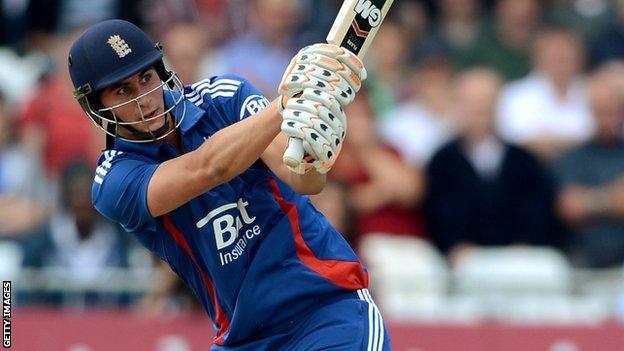 The Nottinghamshire batsman was denied England's first-ever T20 century when he was bowled by Ravi Rampaul with four runs needed to win.

Ravi Bopara made 59 from 43 balls as England chased down 173 with two balls to spare for only their third win in eight T20s against West Indies.

Earlier, Dwayne Smith hit 70 and Dwayne Bravo 54 not out for the tourists.

Hales, who became the first batsman ever to be dismissed on 99 in international T20 cricket, staked his claim to become the long-term successor to the retired Kevin Pietersen with an assured 68-ball innings, which included six fours and four sixes.

It is the highest score by an Englishman in international T20s, surpassing Eoin Morgan's 85 not out against South Africa in Johannesburg in 2009.

Hales was well supported by Bopara, who joined him in a 159-run partnership for the second wicket after Craig Kieswetter (3) had been dismissed in the third over.

Bopara was caught on the boundary by Fidel Edwards off the bowling of Marlon Samuels to leave England needing two off the final three balls, but Morgan took advantage of a Bravo fumble to scramble the required runs.

On a good batting track at Trent Bridge, West Indies survived the early loss of Chris Gayle to set a competitive target.

The West Indies opener was caught on the fine leg boundary by Jonny Bairstow after being tempted to mistime an attempted hook to a Steven Finn bumper.

"This was the best opportunity the Windies had in the whole tour to get a victory, and it will be a huge blow for them not to get it. England have been thoroughly professional, you couldn't ask anything more from them. I hope West Indies will be a better team in the future for what they have learned on this tour."

It was a tactic that Finn had specifically prepared for Gayle in consultation with captain Stuart Broad and coach Andy Flower.

"The bumper is an underrated ball in cricket," he said. "We put the square leg back rather than bring the fine leg up, and thankfully it worked. It could have gone out of the park."

England looked in control after the six powerplay overs, with the visitors 29-2 after good spells from Finn and Jade Dernbach.

But Gayle's fellow opener Dwayne Smith got the West Indies innings back on track with a 54-ball 70 that included five sixes and five fours.

Two other West Indians with Indian Premier League experience, Bravo and Kieron Pollard (23 not out) then brought the score up to 172-4, with a partnership of 65 for the fifth wicket in just 28 balls.

After his accurate earlier spell, Dernbach was the England bowler who took the brunt of the punishment, conceding 17 in his third over and 19 in his final over.

England have only three more T20 internationals, against South Africa, before the defence of their World Twenty20 title gets under way in Sri Lanka on 18 September.