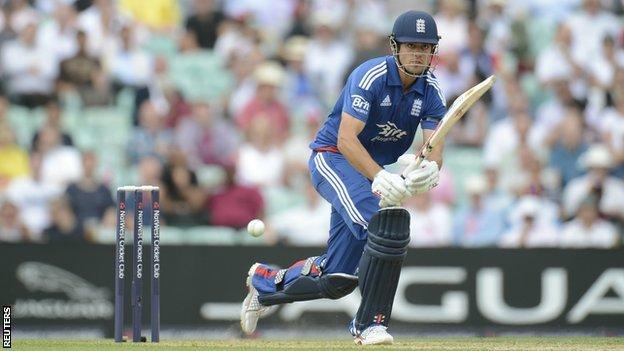 England have named an unchanged 14-man squad for the one-day series against world number one side Australia.

The opening game of the five-match series takes place at Lord's on Friday.

Captain Alastair Cook's squad won their recent series against West Indies 2-0, after comfortable victories at the Rose Bowl and

National selector Geoff Miller said: "Australia are a strong one-day side and I've no doubt this will be a challenging NatWest series for us."

Australia were the last overseas team to win a one-day series on English soil - 6-1 in 2009.

Cook and Ravi Bopara have been released to play in Essex's floodlit match against Australia at Chelmsford on Tuesday night.

Somerset's Craig Kieswetter and Middlesex pair Steven Finn and Eoin Morgan have also been released for games in Tuesday night's round of Friends Life t20 fixtures.

Miller added: "Playing against the number one ranked one-day side in the world is an excellent test for us as we look to keep steadily improving ahead of next summer's ICC Champions Trophy and the 2015 ICC Cricket World Cup."