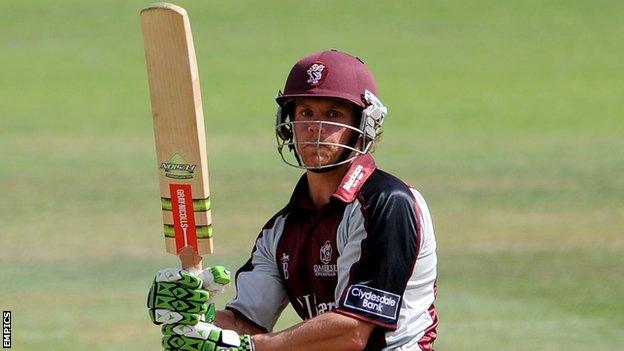 James Hildreth believes he deserves a place in Somerset's T20 team after his unbeaten century against Glamorgan.

The 27-year-old hit 107 not out off 60 balls in response to being left out for the previous game against Warwickshire.

"I found it difficult. It's probably the first time in my career where I've been dropped," he told BBC Somerset.

"We've signed three batsman and some big hitters, so I did find it difficult, and I had to kind of find a way of proving my point."

With Richard Levi, Albie Morkel, Kevin O'Brien, George Dockrell and Craig Kieswetter all away on international duty, Hildreth seized his opportunity with his highest score in the game's shortest format.

All those players, with the exception of Kieswetter, are expected to return for their next game against Northamptonshire but Hildreth hopes his knock will keep him in the starting XI.

"I knew I'd get a chance because the lads were coming and going with England and other international commitments," he added. "Hopefully I've taken it."

"It's a sign of a good squad to be honest. We've got good depth and we know that you need that in Twenty20 cricket to go all the way.

"The last couple of seasons we've had an 11 which has been pretty consistent through most of the season.

"We've got to the finals and for whatever reason we haven't crossed the line. With the depth we've got in our squad with another batsman coming in maybe it's what we need."