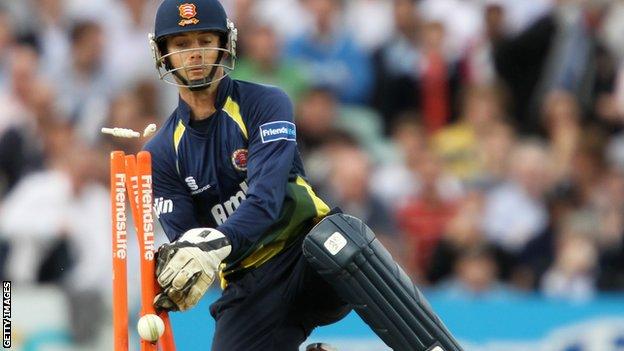 Essex coach Paul Grayson has hailed captain James Foster as the best wicket-keeper in the world.

The 32-year-old has had to focus exclusively on county cricket since his last appearance for England in a Twenty20 international in 2009.

Grayson told BBC Essex: "[Foster] is in good form at the moment. He's in a very good place.

"We know what his keeping is all about. For me he is still the best keeper in world cricket."

Foster is also a good enough batsman to have scored 18 first-class centuries but showed his versatility by hitting 47 off 20 balls in Essex's T20 defeat by Sussex on Sunday.

Meanwhile, Essex will welcome a sell-out crowd to Chelmsford on Tuesday when they play a one-day fixture against Australia and Grayson revealed that England pair Alastair Cook and Ravi Bopara will be back to play in the prestigious game.

"Alastair Cook's available and so is Ravi [Bopara] so we've got those to come back to play in [the Australia] game.

"It's not often you get to play Australia in a 50-over match, especially a floodlit game at Chelmsford," he said.

"All the guys are desperate to play, very keen to put in a performance and we'll put out a strong side on Tuesday."