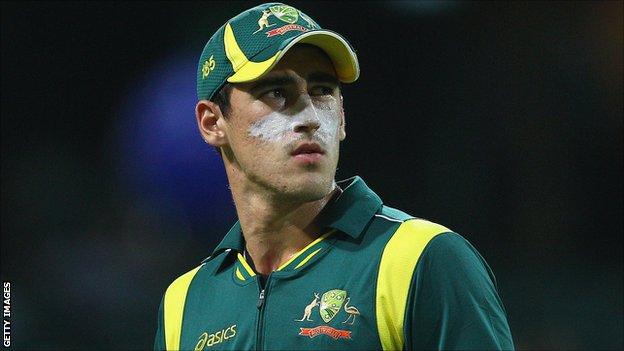 Mitchell Starc took wickets with the final two balls of the match as Yorkshire beat Leicestershire by four runs to move top of their group.

Nathan Buck (3-28) did early damage at the top of the Yorkshire innings, while Abdul Razzaq also took three wickets.

The visitors posted 151-9, thanks to some late hitting from Richard Pyrah, who struck 35 from 23 balls.

Leicestershire needed nine runs from the last over to win, but Starc restricted them to 147-9.

The hosts lost three wickets in their final four balls, Joe Root inflicting a fourth run out of the innings to dismiss Rob Taylor, before Starc bowled Wayne White and Buck to complete the victory.

Earlier, 16 runs and three wickets came in the 20th over of the Yorkshire innings.

Pyrah hit two huge sixes over mid-wicket off the bowling of Razzaq before perishing going for another big shot over long-off.

Those runs would prove crucial as Leicestershire lost wickets regularly in their run chase and fell just short of their target, despite a knock of 39 off 33 balls from Ramnaresh Sarwan.

Yorkshire lead the North Group by two points from Nottinghamshire and Lancashire, while Leicestershire's defence of their FL t20 title looks likely to end at the group stage, having won one and lost five of their six fixtures so far.