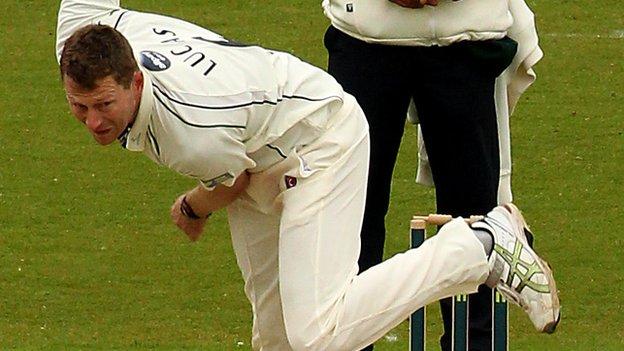 Hard-working Worcestershire paceman David Lucas has won praise from coach Steve Rhodes for helping to fill in for the injured Alan Richardson.

But he has already matched that total inside eight first-class fixtures with Worcestershire this time round.

We have taken our time with Alan Richardson. No need to rush. He is happy with his progress, and he should be ready for Durham on 10 July

"You look at Dave's season and he's not shirked anything. He's played almost every game we've played," said Rhodes.

"At times, it has been a struggle and a lot of people would have gone missing. But he has stood up to it.

"He has manned up. It has not been easy when things are not going well for him and that's credit to him," Rhodes told BBC Hereford and Worcester.

Richardson, the country's leading Championship wicket-taker in 2011, has been out since injuring his shoulder in the home Championship game against Surrey in May and will miss the entire FL t20.

But the former Staffordshire and Warwickshire man has been lined up to play for Worcestershire's Second XI against Yorkshire at Pudsey this week.

And Rhodes has targeted Richardson's return for the Championship match against Durham on 10 July.

"I'm sure he'll do well," said Rhodes. "He is in very good spirits.

"We have taken our time with him. No need to rush. He is happy with his progress, and he should be ready for Durham."

Worcestershire, third in their FL t20 group after winning two of their first four matches, still have six to come, starting with Friday night's home clash against Glamorgan.