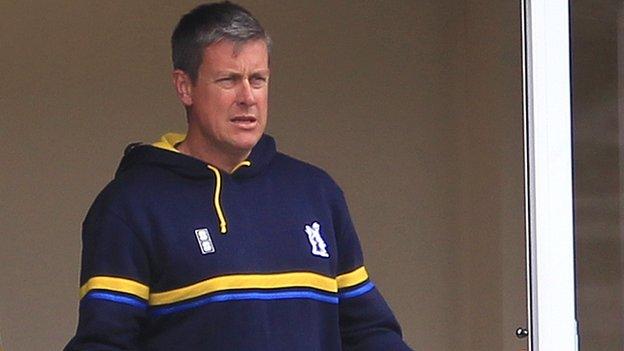 The Bears got off to a slow start in this year's competition when they lost twice, either side of the rained-off home local derby with Worcestershire.

But, after beating Northants last Tuesday night, despite again being hit by the weather against Somerset, they then beat the Pears at New Road.

The likes of Laurie Evans are putting guys under pressure. It's another benefit of not having, as I'd call them, guns to hire

"We've got four games left and we'll set out to win them all," said Giles.

"Let's just do what we did at Worcester. We did the basics really well. We squeezed them in the field and we bowled in consistently good areas.

"We've got a chance. We've got to keep believing that."

Friday's win lifted them to second in the group on six points from six games, with trips to Bristol (on Wednesday) and Northampton (on Friday) followed by closing home games against Gloucestershire and Glamorgan.

But Giles is looking further ahead than Wednesday's clash with Gloucestershire at Nevil Road.

"Gloucestershire are a little bit unknown to us because we haven't played them in the last few years," he told BBC Coventry & Warwickshire.

"We'll have a couple of guys come back in so we'll have lots of options," said Giles. "We can look at the wicket and see how we go.

"Having to make tough decisions is surely a good thing and it's nice that young players are coming through.

"The likes of Laurie Evans are putting guys under pressure. The innings he played against Northants was superb. It's another benefit of not having, as I'd call them, guns to hire. You get these young players coming through and showing what they can do."