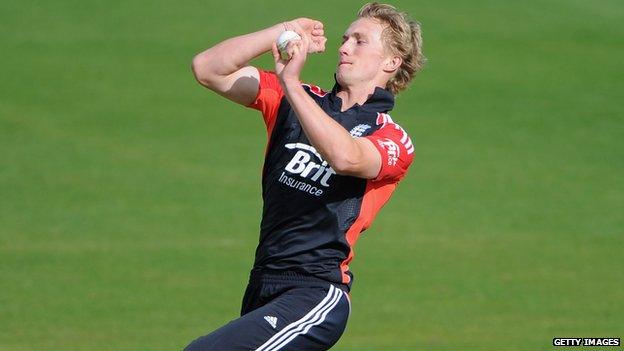 Kent captain Rob Key has hailed the impact of Adam Ball in limited-overs cricket, describing the 19-year-old as "a serious performer".

Ball is the Spitfires' leading wicket-taker in the FL t20 with seven at a cost of only 14.57 runs each.

"He's not the quickest bowler, but he's shown unbelievable nous for such as young man," Key told BBC Radio Kent.

"Mark Davies is doing a brilliant job with the new ball and Adam Ball is locking down the middle period."

After enduring a long and arduous debut season on the county circuit, Kent and the England and Wales Cricket Board have restricted the amount of cricket Ball has played so far this summer, with appearances so far limited only to CB40 and flt20 games.

But the England under-19 captain's recent performances against the Hampshire Royals, both in the field and with the ball, particularly caught the eye.

"In a high-pressure environment at the Rose Bowl he was fantastic," Key continued.

"When we had a boundary that was probably no more than 30 yards, his spell was crucial.

"He's kept us in games and he's put us in great positions along with Treddy [James Tredwell] and the senior guys who you'd expect it from.

"As one day cricket goes, he's a serious performer."