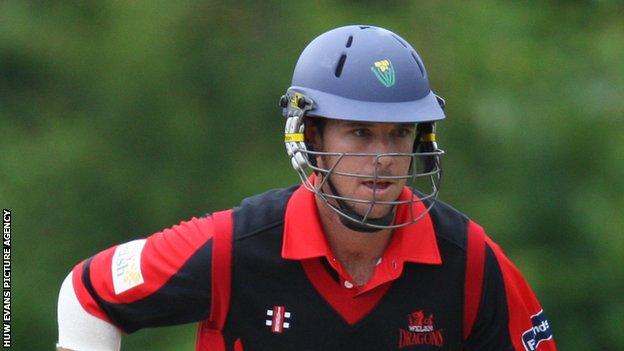 Captain Jim Allenby is confident his Welsh Dragons side can reach the Twenty20 quarter-finals despite a rain-affected start to their campaign.

The Dragons have just four points from four games - with a rain-affected win, a defeat and two wash-outs - but now face four matches in five days.

They visit Worcestershire on Friday and must finish in the top two in their group to be sure of qualification.

"Our group is wide open. Everyone is getting the weather," said Allenby.

"The four points is not an ideal start but it could have been a lot worse."

The Welsh county, who reached the T20 finals day in 2004 before losing in the semi-finals, have not qualified from the T20 Cup's pool stages since reaching the quarter-finals in 2008.

After a close match at Taunton last weekend which Somerset won with two balls to spare - following an unbeaten century from James Hildreth - the Dragons will have had almost a week off before travelling to Worcester on Friday.

Allenby's men then host Northamptonshire Steelbacks at the Swalec Stadium on Saturday, travel to Gloucestershire Gladiators on Monday and host the Royals in Cardiff on Tuesday in a crucial five-day period in a lucrative tournament the club are targeting for success.

And Allenby believes it will not be a problem playing four games almost back-to-back.

"We have four games in five days and that's a massive time for us," he said.

"If we can we at least three of them I think we will find ourselves in at least second spot.

"T20 is not over-taxing. It won't be a problem for the boys. It might mean a couple of the bowlers don't play every game."

The Welsh Dragons need to finish in the top two in their group or be one of the two best third-placed counties in the three groups to reach the last eight.

But despite a stuttering start the Dragons are still confident especially with the likes of Marsh, who scored 85 from 52 balls against Somerset at Taunton, in their side.

Allenby added: "We are playing good cricket so we know if we get on a roll and win two or three in a roll we are going to be right up there."

"We batted brilliantly [at Taunton] but that knock from Hildreth [107 from 60 balls] was one of the best I've seen."