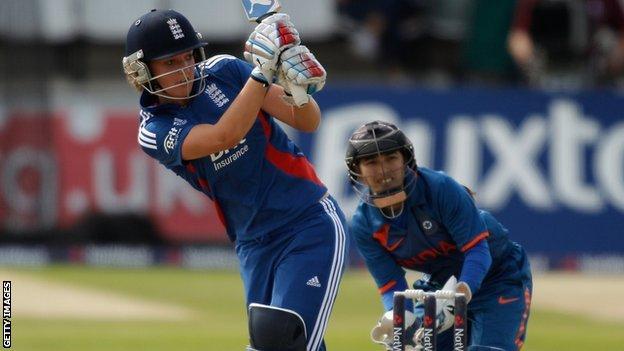 India scored 104-8 from their 20 overs, with Katherine Brunt and Danielle Wyatt the pick of the England bowlers with two wickets apiece.

England and India meet again in the second T20 international at Chelmsford on Thursday, then begin a five match ODI series at Lord's on Sunday.

After the early loss of captain Charlotte Edwards, Taylor and Laura Marsh added 104 runs for the second wicket of the England innings.

Taylor's 69 came off 49 deliveries, with ten fours, and Marsh hit 41 off 39 balls, but Gouher Sultana dismissed both of them in successive overs to limit the England scoring rate.

In the Indian reply, Brunt dismissed both openers to reduce the visitors to 20-2 in five overs.

Mithali Raj (26) and Harmanpreet Kaur (15) put on 30 for the third wicket, but India were always behind the run rate and lost wickets at regular intervals.

Wyatt picked up two wickets in the final over to finish with figures of 2-10 from her four overs.