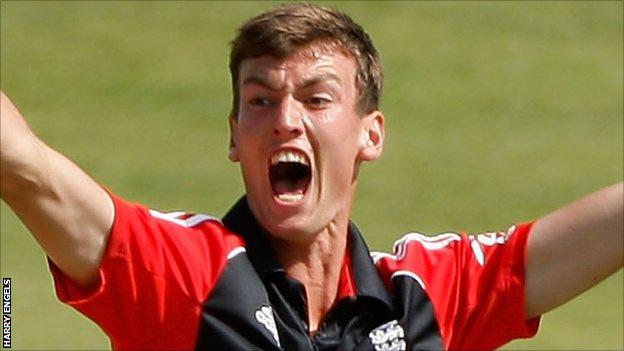 Essex fast bowler Reece Topley says he was pleased to show what he was capable of as he claimed four wickets during the one-day match against Australia.

Topley, 18, has yet to play in a County Championship match this season but took 4-46 during Essex's

"I'm delighted with my final figures and how I bowled. I just think I showed what I can do," he told BBC Essex.

"I came on to bowl at that period where (the ball) started reversing."

He added: "A few balls were conventionally swinging in and a couple were holding their line. I think that's why I was quite dangerous.

"We didn't humiliate ourselves and it's a format we aren't familiar with.

"We've got to realise we are playing against the best outfit in the world so it was going to be a tough chase."

Needing 314 to win, Essex were bowled out for 134 as the Australians picked up a convincing victory ahead of the one-day series against England.

Topley's first-team experience this season had been limited to four FL t20 games, where he has taken seven wickets, but he was glad to get the chance to bowl against international opposition.

"I've played a lot of second-team cricket and haven't had the opportunity to play first-class cricket - that's what I want to be playing," added Topley.

"After having a good season last season I feel I can contribute in that format."