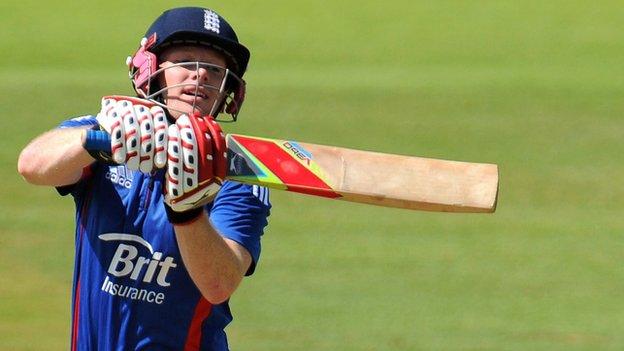 Morgan's unbeaten 89 off 63 balls gave impetus to England's innings after they had started slowly in in the first one-day international at Lord's.

The left-hander struck five fours and four huge sixes to help England to a total of 272-5.

"We kept wickets in hand, and we all know at Lord's you can make up time, especially with people like Eoin to come in. It worked well.

"To have wickets in hand is part of our gameplan, and the conditions didn't allow us to do much else for the first 20 odd overs - I don't think you could have played much differently.

"To get a good start like we did - it might have been a bit slow - meant we certainly laid the groundwork for someone like 'Morgs' to come in and do what he did."

It was a welcome return to form for Morgan, who was dropped from the England Test team after a poor series against Pakistan earlier in 2012 and was unable to force his way into the Kolkata Knight Riders team in the Indian Premier League season.

"It's not fun when you're not getting any runs, not contributing to the team. So today was a big start for my summer," said the Dublin-born batsman.

Australia captain Michael Clarke felt that Morgan's rapid-fire partnership of 83 with Craig Kieswetter took the game away from his side and put England on the road to their seventh successive one-day international victory.

"Morgan played really well, that's for sure," said Clarke. "He helped England get to a very good total, and it was too good for us today unfortunately.

"We probably didn't execute our skills at the death as well as we could have. I think they took 80-odd off the last 10 overs.

"Then we lost wickets at important stages of the game, where we needed blokes to go on and make big scores.

"They outplayed us today in all facets. They batted better, didn't lose wickets at crucial times - and their death bowling and powerplay bowling was very good."