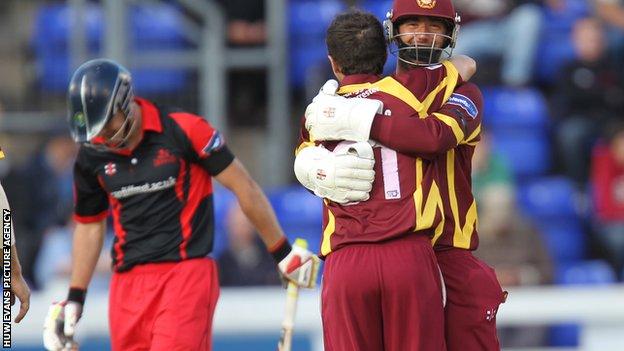 Skipper Alex Wakely then hit 54 not out off 40 balls as the visitors reached their target from only 13.1 overs.

But the nine-wicket victory in Cardiff is not enough to lift Northants off the bottom of their group.

Glamorgan's chances of making the last eight are looking extremely remote after Saturday's defeat, a result that always looked likely once spin duo De Lange and Middlebrook had completed their devastating spells of bowling.

Opener David Willey got the Northants innings off to a flying start, hitting five boundaries in his 17-ball knock.

After Willey's departure, Wakely and Kyle Coetzer (28no) enjoyed an unbroken second-wicket stand of 77 to guide Northants to a comprehensive victory.

And Coetzer finished the match in style, smashing a huge six over mid-wicket off the bowling of left-arm spinner Dean Cosker.

"I think (the win) has been coming for a long time. Things haven't gone our way this season.

"There's been a few 50-50 moments in this T20 season and things could have been different for us.

"I've got to take some of the blame as captain, but it's nice to get a win, because it was starting to get to me a little bit.

"Hopefully we can finish well and get people talking (positively) about T20 in Northampton again."