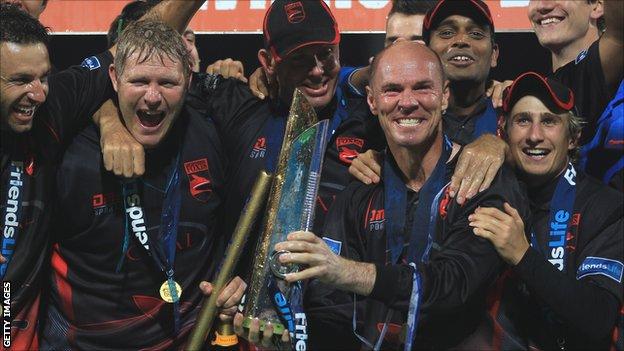 Reigning champions Leicestershire are out of this year's FL t20 after losing by nine wickets to Durham.

Leicestershire opener Abdul Razzaq (47) was dismissed in the final over but it was slow progress for the visitors, who made only 114-7 from their 20 overs.

Durham openers Phil Mustard (51) and Herschelle Gibbs (49no) made light work of the run chase, reaching their target with more than six overs to spare.

Leicestershire have won only two of their eight games in the group stages.

Durham's hopes of reaching the last eight now seem to hinge on their home fixture with Lancashire on 8 July.

The form of their two opening batsmen is a huge positive - Gibbs is level with Worcestershire's Phil Hughes at the top of the run-scoring charts, while Mustard blasted a half-century from just 29 balls to complete an easy win for the hosts.

"The bowlers set up the total for us and we probably had the best of the pitch.

"It nibbled about a bit for them but when we got out there and batted it was better for us.

"Chasing 114, if you can get the first two in and get a good partnership going it's a long way back from the other team.

"Herschelle has had a great T20 campaign for us and hopefully he can carry it on. I am starting to hit it nicely after a few disappointing early games, but whether it's too late, we'll not know until after the next two games."