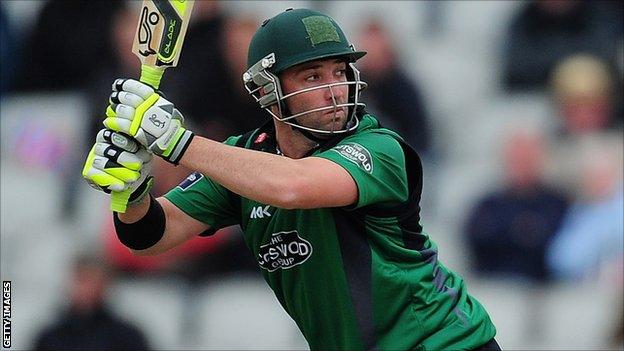 Group leaders Somerset lost their second match in a row as Worcestershire moved a step closer to a t20 quarter-final spot with victory at Taunton.

The Australian's 32-ball knock took him level with Durham's Herschelle Gibbs at the top of the run charts this season.

Skipper Daryl Mitchell then did the damage with the ball, taking 3-13 as Somerset slumped to 119 all out.

Brett D'Oliveira (3-20) was also impressive, taking his first wickets in the FL t20, as Worcestershire moved to within a point of their opponents.

Earlier, Somerset received a six-run penalty because of a slow over rate.

"It's very disappointing to lose two games in front of packed houses.

"I thought Worcestershire were quite clever with the cricket they played and thoroughly deserved to win. The game was ours and we didn't come up to the mark.

"We have enormous talent in the side but we haven't been convincing in the last two games.

"It's a worry if it's a trend but we've now got two very important games which we can retrieve quite easily."