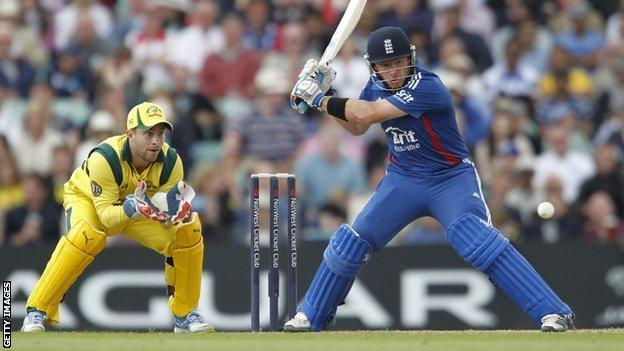 England produced a polished all-round performance to beat Australia by six wickets in the second one-day international and take a 2-0 lead in the five-match series.

A disciplined bowling display restricted the tourists to 251-7 after they had won the toss and chosen to bat on a good track at The Oval.

England were gifted a flying start to their reply by some erratic bowling from Mitchell Johnson, and Ian Bell led from the front with a composed 75.

Ravi Bopara saw England to within two runs of their target with an increasingly confident 82 before Eoin Morgan finished the job with 26 balls to spare.

"I don't think Australia needed to make the tinkering they did today. George Bailey was fine at number three but they moved him down - if they didn't want Smith at six, they could have brought Peter Forrest in at six. But England are an exceptional cricket team, they are becoming really hard to beat, Australia are going to have to play some exceptional cricket to win this series."

The win was England's eighth in a row in one-day cricket, equalling a record they have achieved three times before. If Alastair Cook's men can complete a 5-0 whitewash of the Australians they will become the number one side in the world and be the first country to simultaneously top the rankings in all three forms of the game.

Resounding though the victory ultimately was, the match could have taken a different course if a key decision had gone Australia's way.

After Michael Clarke had bowled Bell with his first ball to break a partnership of 90 with Bopara, he thought he had secured another wicket two balls later when Morgan was given out lbw by umpire Richard Illingworth.

The Dubliner, England's hero with 89 not out off 63 balls in Friday's series-opener at Lord's, immediately sent for a review and was reprieved when Hotspot appeared to reveal the faintest of inside edges.

Morgan did not put a foot wrong thereafter as he and Bopara ruthlessly finished off the demoralised tourists to the delight of a partisan Oval crowd.

England's target would have been all the more challenging without another fine display from a bowling attack without a weak link.

Steven Finn made an early breakthrough when quick-scoring opener David Warner - after a pair of trademark thumps to the boundary - mis-timed a pull shot and sent the ball looping straight to Bell at square leg.

Peter Forrest, preferred to Steve Smith in the batting line-up, was then brilliantly caught one-handed by Craig Kieswetter down the leg side.

Shane Watson carried the fight to England with some typically powerful strokeplay, riding his luck along the way to a half-century.

Dropped in the gully by Jonathan Trott on eight, he successfully reviewed an lbw dismissal on 40 and would have been run out for 47 but for an errant throw from Bell.

An inspired piece of captaincy from Cook accounted for this opposite number as Clarke got a faint nick to Bopara's third ball and was snared behind.

Bopara and Graeme Swann put a strangle on the Australia scoring in the middle of the innings, with only 24 runs scored in 10 overs. And Watson, clearly feeling the need to accelerate, tried to dispatch Swann into the stands but could only pick out Finn at deep midwicket.

George Bailey, who took 53 balls to reach 20, only needed a further 20 balls to bring up his fifty in a useful stand of 78 with David Hussey.

The duo took the score past 200 in the 44th over before David Hussey was run out by a brilliant piece of athleticism from Finn and Bailey was castled by a pitched-up delivery from Bresnan.

Matthew Wade could only make six but Lee came to Australia's aid with a typically robust cameo, dropped twice by Morgan at long-on on his way to an unbeaten 20 off 11 balls.

When England replied Johnson, playing international cricket for the first time since November, over-stepped twice in his first two overs with the resulting free hits both dispatched to the boundary, by Cook and Bell.

Clint McKay broke through with a delightful delivery, which swung in to the left-hander and trapped him plumb in front of the stumps.

Jonathan Trott made 17 before giving his wicket away in uncharacteristic fashion as he was bowled off an inside edge trying to leather the ball into the stands.

Bell planted Watson over his head for six and brought up his half-century with a supremely confident on-drive over midwicket for four.

With England is cruise control, Clarke decided to introduce his own slow left-arm bowling into the attack and the decision paid instant dividends as his first ball skidded past Bell's bat and knocked down his middle stump.

At that point, a second-ball dismissal for Morgan could have shaken England, but after being saved by the Decision Review System, the left-hander rediscovered his usual panache on route to 43 off 40 balls.

After a nervous start, Bopara cut, pulled and drove his way to a fine 82, only to fall at the death attempting a suicidal single.

By then, however, England were home and hosed and the hosts will be looking to wrap up the series in Wednesday's third match at Edgbaston.