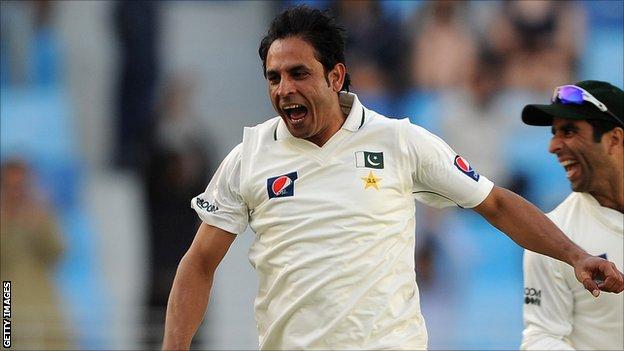 Abdur Rehman is set to join Somerset for the remainder of the 2012 season.

The left-arm spinner, 32, has played 16 Tests for Pakistan and took 19 wickets in their 3-0 series victory over England last winter.

"It just remains for Abdur to sort out a visa," said Somerset's director of cricket Brian Rose.

"Once that is done, we hope he will be with us in time for our Championship game with Warwickshire at Taunton, starting on 18 July."

It will be the first time that Rehman, who has also featured in 23 one-day internationals and seven T20 matches for his country, will have played in English county cricket.

Somerset will be without George Dockrell for a month later this summer because of his international commitments with Ireland.

He is due to lead their Under-19 side at the World Cup in Australia and Rose told the club website that Rehman will be a more than adequate replacement.

"We looked at other possible targets, but he was always high on the list," he said. "He has an excellent first-class record, with a bowling average not dissimilar to Murali Kartik's, and he has played in 16 Test matches for Pakistan, the latest in Sri Lanka being only last week.

"Rehman also bats reasonably well, going in around number eight, so that was also a plus point when it came to signing him.

"The other positive is that he is not currently in Pakistan's T20 side, so once he joins us he should be available for the remainder of our season."