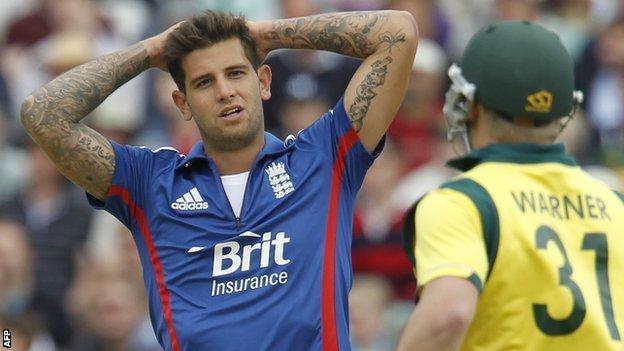 Surrey seamer Jade Dernbach has been ruled out of the remainder of England's one-day international series against Australia with a side strain.

Dernbach, 26, picked up the injury during England's six-wicket victory in the second one-dayer on Sunday.

Along with Stuart Meaker, Dernbach had already been released from the third game of the series on Wednesday to attend the funeral of Tom Maynard.

Chris Woakes had earlier been added to the squad to cover for the pair.

Dernbach and Meaker's former Surrey team-mate Maynard died after being struck by a London Underground train on 18 June.

A replacement for South African-born Dernbach will be announced following the midweek fixture at Edgbaston.

England are still hopeful James Anderson will be fit for the remainder of the five-match series after his groin injury, but have brought in Woakes as a precaution.

Woakes, 23, has played four times for England in one-day internationals, taking seven wickets at an average of 24.14 runs.

He last appeared for England against Ireland in August 2011.

A victory for England would put them in an unassailable position in the series after taking a 2-0 lead with Sunday's win at the Oval.