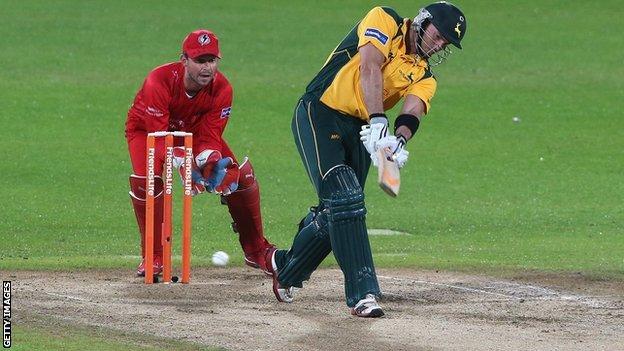 Nottinghamshire remain unbeaten in this season's FL t20 as they beat Lancashire in a game interrupted by rain.

Lancashire built a commanding total of 178-4 off 20 overs as Stephen Moore smashed 80 off 58 balls with Tom Smith adding 56 and Steven Croft 31 not out.

The hosts scored 7-0 off one over before a lengthy delay saw them set a revised target of 49 off five overs.

They reached 52-2 with two balls to spare with Michael Lumb making 22 and Riki Wessels an unbeaten 21.

Wessels hit five boundaries in his eight-ball innings as Nottinghamshire won by eight wickets to move ahead of Yorkshire at the top of the North Group.

Moore and Smith had put on 119 off 14 overs for a record opening-wicket partnership for Lancashire in T20 cricket.