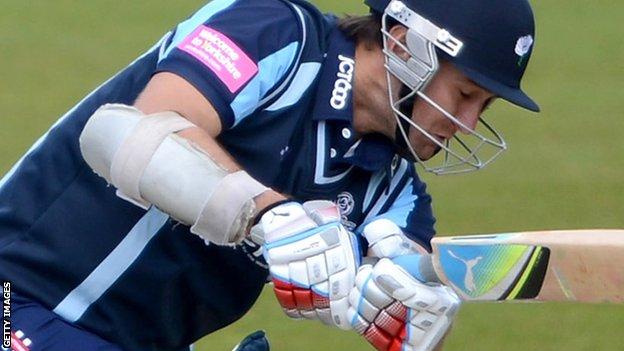 Yorkshire beat Nottinghamshire by six wickets to secure their T20 quarter-final place but the hosts are still waiting to book their last-eight birth.

The visitors set the tone by dismissing Riki Wessels with the first ball of the game and Notts were indebted to Adam Voges (70) to take them to 148-6.

Yorkshire were sent on their way to victory by 58 from Phil Jaques.

Gary Ballance's 26 off 13 balls steered Yorkshire to 150-4 with 14 balls left, including two sixes to win the game.

It was Nottinghamshire's first defeat in this season's competition.

Yorkshire, who have never reached Twenty20 finals day, become the first side from the North Group to book a place in this season's quarter-finals.

Notts will join them with victory in either of their last two games against Derbyshire (Friday) or Leicestershire (Sunday).