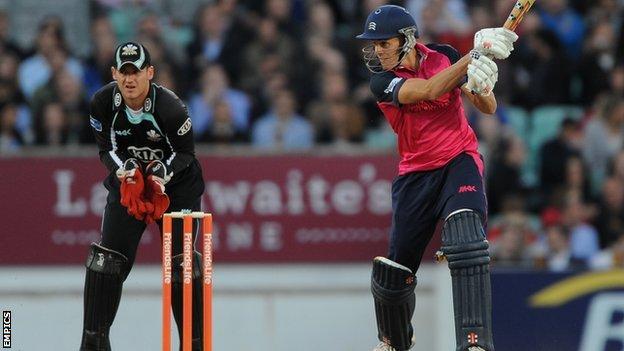 Middlesex clinched a thrilling FL t20 victory as they defeated Surrey with one ball to spare at the Oval.

Middlesex looked in trouble at 52-3 in reply before Neil Dexter (41) and Ollie Wilkin (28) took them close to the win.

The visitors needed three runs off the last over but lost the wickets of Ollie Rayner and Wilkin before number 11 Tom Smith hit the winning boundary.

Although both sides could not reach the quarter finals of the competition, a crowd of 15,000 turned up at the Oval and they were treated to an entertaining game.

Surrey, whose effort of 154-4 was their highest in the competition this season, looked on course for their first victory in seven T20 games as Middlesex were on 106-7, needing 49 to win off the final 35 balls.

However, Middlesex's eighth-wicket partnership turned the match in their favour.

There was nearly a dramatic twist as Surrey's Gareth Batty firstly took a superb catch at mid-off to dismiss Rayner in the last over and then helped run out Wilkin two balls later.

But Smith scored the winning runs with a four to long-on off the only ball he faced.