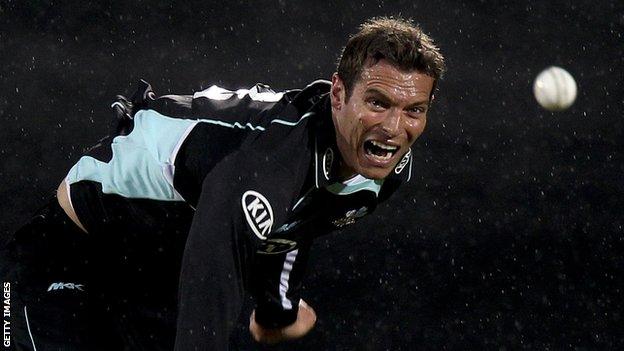 Surrey and England fast bowler Chris Tremlett is confident that surgery on his back has been a success.

The 30-year-old has played three Twenty20 matches for his county since his return to action last month.

He told BBC London 94.9: "A back injury sometimes takes longer thank you think so I was a little bit hesitant and tentative to start with.

"It has been a frustrating lay-off and a long process but I guess the light is at the end of the tunnel."

He added: "I feel like I am bowling similar to how I was before I got injured. It takes time to get those overs in your legs.

"Hopefully I can keep the back strong, the operation will have worked and it puts a few more years on my career."

Tremlett was forced onto the sidelines following the first Test against Pakistan in Dubai in January.

The 6ft 7in bowler, who underwent surgery after scans discovered a bulging disc in his back, has targeted an eventual return to England duty as he steps up his return.

"It's the longest time I've had out of the game in my whole career," he continued.

"I've been finding my feet with the second team. I've played a few Twenty20 games but it's going to be harder work playing in the four-day game.

"When I had the surgery, I knew it wasn't going to be a case of being able to blast myself back into Surrey and the England team.

"I'm looking to get back in the Test team but it all starts with Surrey.

"Hopefully I can bolster the team by coming back and playing in all forms of the game."