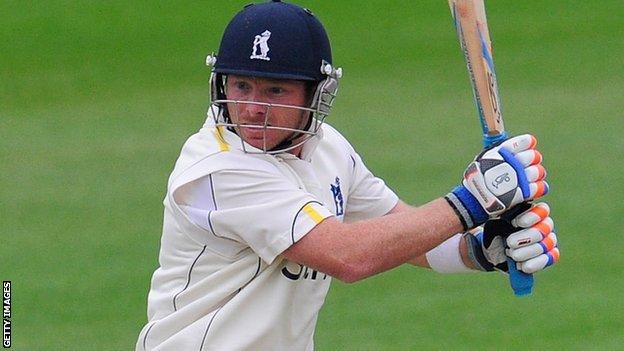 England batsman Ian Bell has signed a new three-year contract that keeps him at Warwickshire until at least 2015.

Bell, 30, progressed through the Bears' youth-team system and made his Warwickshire first-class debut in 1999.

He said: "I take a great deal of pride representing my home county and it's fantastic to sign a new deal to continue playing for Warwickshire.

"The new facilities at Edgbaston are among the best in world cricket and I wouldn't want to play anywhere else."

He added: "We've got a great coaching team with strong ties to Warwickshire and one of the strongest playing squads that I've been a part of."

Bell has played for Warwickshire in three County Championship matches this season, scoring 120 in his side's nine-wicket victory against Durham in May.

In 2001 he became the youngest player to receive a Warwickshire county cap and helped the side to the 2004 County Championship title and the CB40 trophy in 2010.

Bell made his England debut in 2004 and has since recorded 16 centuries in 77 Test matches and two centuries in 112 one-day internationals.

Ashley Giles, Warwickshire's director of cricket, added: "Having been part of the Warwickshire set-up for several years, it's been fantastic to watch Belly progress from a talented youth-team player to one of the best batsmen in the world.

"He trains exceptionally hard and is a great role model. We're all delighted he's committed to playing his county cricket for Warwickshire for at least the next three years."