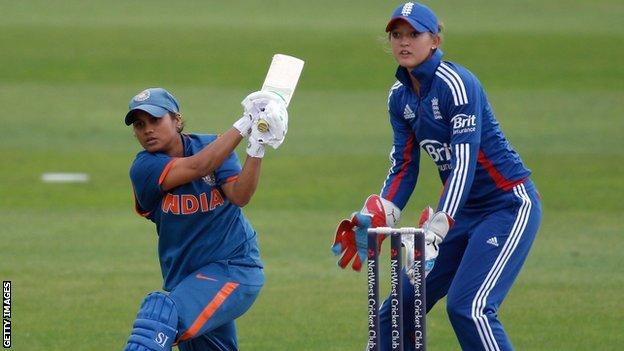 India's women beat England by 14 runs at Taunton to take a 2-0 lead in the five-game one-day international series.

Opener Tammy Beaumont top-scored with 31 but England were eventually bowled out for 116 with 16 balls to spare.

By the time Brunt and Elwiss had bowled their 10 overs straight through, India were 43-6 after 20 overs, and when Harmanpreet Kaur (21) quickly fell to spinner Laura Marsh, England must have fancied their chances of skittling India's lower order cheaply.

But the tourists battled their way to a defendable target before seamer Jhulan Goswami (4-17) accounted for Edwards and Taylor early on.

India's spinners then put the brakes on England in mid-innings, and despite a spirited last-wicket stand of 26 between Danni Wyatt (19 not out) and Elwiss (10), that Sharma-Sultana stand ultimately proved the difference between the sides.

The next one-day international is at Taunton on Thursday, with full commentary on BBC 5 live sports extra.