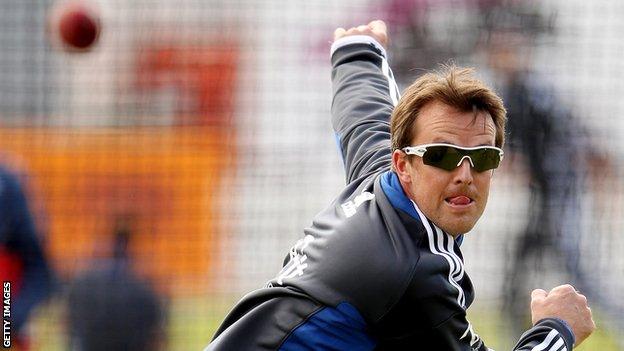 England have taken the opportunity to rest the 33-year-old, who is suffering from a sore elbow on his right arm.

"Graeme has some pain in his elbow at the moment and we feel that an extra week's rest will allow it to settle," said selector Geoff Miller.

Swann will be replaced by Kent off-spinner James Tredwell in the five-game series, which England lead 2-0.

The third ODI at Edgbaston on Wednesday was called off because of rain, meaning England are guaranteed at least a draw in the series.

But Miller stressed the decision to omit Swann was made before the series with Australia began.

He said: "We had earmarked the fourth and fifth matches as an opportunity to rest Graeme, regardless of the result at Edgbaston.

"We have to consider our preparations for the Test series later this month."

England play a three-match Test series against South Africa beginning on 19 July, and will be seeking to retain their status as the world's number one Test side against the team ranked second.

Seamer Chris Woakes has kept his place in the squad for the fourth one-day international with Australia on 7 July at Chester-le-Street.

Woakes was included in the squad for Edgbaston, replacing Jade Dernbach and Stuart Meaker, who attended the funeral of former Surrey team-mate Tom Maynard.

But with Dernbach unavailable for the final two matches because of a side strain, Woakes has retained his place.