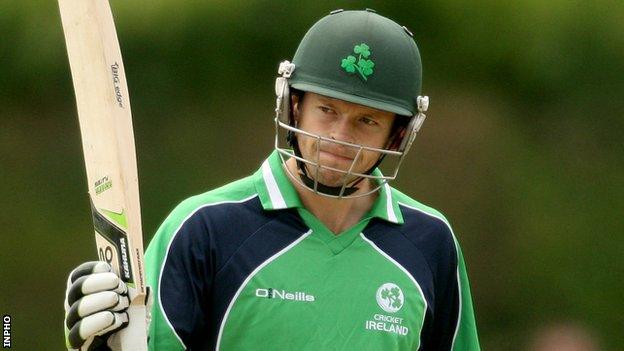 After rain caused the postponement of the first scheduled clash between the sides at Clontarf, the Irish were in trouble at 33-4 and then 89-7.

However, Tim Murtagh and George Dockrell stayed with Joyce as the Irish were all out for 163 in the 47th over.

The win maintains Ireland's position at the top of the ICC World Cricket League table.

In-form Paul Stirling departed early to leave Ireland on 9-1 and captain William Porterfield, Niall O'Brien and Gary Wilson all failed to reach double figures as the home side struggled to 33-4.

Kevin O'Brien and Joyce steered Ireland to 80-4 but O'Brien was then run-out after hitting four sixes and Alex Cusack and John Mooney quickly departed to leave Ireland struggling on 89-7.

However, crucially, tailenders Murtagh (15) and Dockrell (9) stuck around sufficiently to enable Joyce to push Ireland over the 150 mark.

On a wet pitch, their total of 163 looked competitive, and so it proved as Afghan wickets tumbled.

Alex Cusack with three wickets and Trent Johnston with two did the early damage in the Afghanistan innings as the visitors stumbled to 33-5.

With 26 for the seventh wicket the highest partnership, batsmen continued to be dismissed regularly. Spinners Paul Stirling and George Dockrell mopped up the tail with two dismissals apiece.

Ireland's next games will be the three-match Twenty20 series against Bangladesh in Belfast this month.