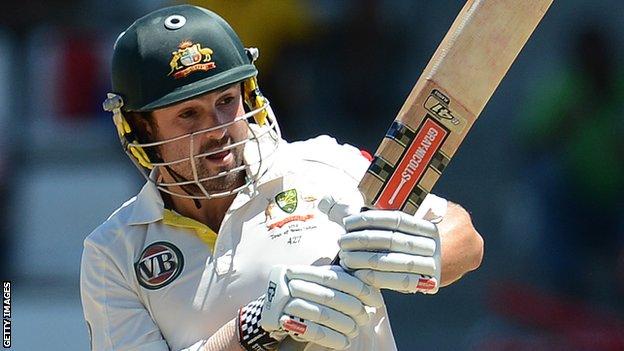 Ed Cowan says he would like to return to Gloucestershire for a longer stay next season.

And the Australia batsman, 30, made an immediate impact by hitting 70 on his debut in Gloucestershire's seven-wicket T20 victory over Worcestershire.

"I'll try and win games and hopefully they might invite me back for a full stint," he told BBC Gloucestershire.

"It's always nice to do well in your first outing for any team.

"To contribute and win a game for that team goes a long way to settling in pretty quickly in the dressing room."

Cowan is due to captain his country's 'A' team tour of England in July and August, but agreed to travel early to play for Gloucestershire.

He is expected to play in all formats up to 18 July, when New Zealand's Nicol will arrive.

Cowan struck up a successful partnership with Hamish Marshall in his first game, as the pair reached 142 for the second to help Gloucestershire to finish on 160-3 with 12 balls to spare.

And Marshall was quick to praise the Australian's impact: "Ed bedded himself in and all of a sudden just unleashed.

"He looks a quality player; I guess you have to be to be playing cricket for Australia.

"He's proved his worth and we're delighted to have him. To perform like that it takes a bit of weight off my shoulders.

"He hit the ball in to gaps and hit the boundaries through the field as well as he cleared the field."