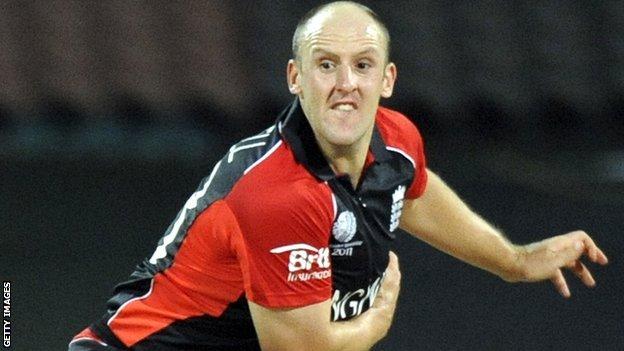 Spinner James Tredwell hopes to make an impression for England as he deputises for Graeme Swann against Australia in Durham on Saturday.

Swann, 33, is resting a sore right elbow for the two remaining matches of the five-game series, allowing Tredwell a place in the attack.

The Kent off-spinner has promised to try to make an impact in his first international for 16 months.

"Once you have had a taste of cricket [with England] you want more," he said.

Tredwell has been called into the squad with England already 2-0 up and just two games remaining, following Wednesday's washout at Edgbaston.

The 33-year-old right-handed spinner and left-handed batsman will collect just his sixth one-day international cap at Chester-le-Street but is relishing the opportunity.

"You try to emulate Graeme Swann but he is the man in possession," he said.

"All the time he is doing really well it is going to be tough to push him out.

"It is slightly difficult, but you have to enjoy where you are. If I wasn't a cricketer, I might be a dustman or something. Every day is a bonus really."

Another bowler hoping for his first outing of the series on Saturday is Australian seamer Ben Hilfenhaus.

The Ashes veteran says conditions in Durham may suit his style of bowling.

"It does swing a bit here, especially when you have two new white balls," the Tasmanian said.

"My skill is swinging the ball up front, that is something I have always done.

"When it stops swinging I try to keep it tight for as long as I can."