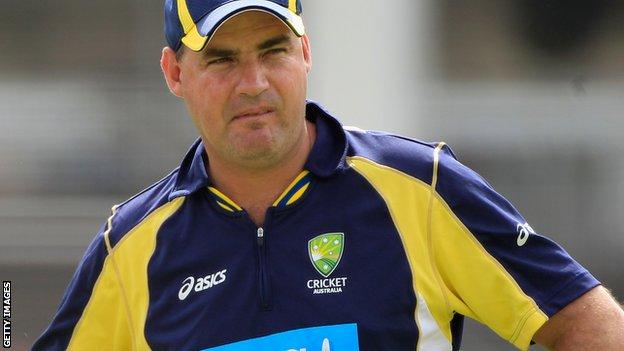 Australia coach Mickey Arthur has criticised his team after their latest defeat by England.

Saturday's eight-wicket win in Durham gave England a 3-0 lead in the one-day international series with only Tuesday's game at Old Trafford to go.

"The last two wins have been a stroll in the park. England got the conditions with the toss, but England are a better group of players at this moment in time, whatever the conditions. People are standing up and performing. I think England are on to something in one-day cricket."

"We had a meeting, a tough, hard meeting. We spoke some home truths. I want to see how they respond."

The prospect of losing the series 4-0 has led Arthur to question his team's character and ambition, despite the fact that they retain the number one ranking in international one-day cricket.

"I've said it all through our home summer - there's just something missing with the 50-over team. I'm not sure what it is - is it character, is it ambition?

"I'm not sure - there's just something clearly missing. I've challenged the players, I'll always be honest and I'll say it how it is. I'm really looking for a response on Tuesday."

Australia await the results of scans on calf injuries to pace bowler Brett Lee and all-rounder Shane Watson before the final game of the series in Manchester, where Arthur is calling for a more aggressive performance.

"I want to see a bit of mongrel come Tuesday, I really do," said the former South Africa coach. "I think we've been a bit submissive this whole series. We've allowed ourselves to be bullied, and we're better than that."

Left-arm pace bowler Mitchell Starc has been called up to the squad from his spell with Yorkshire as cover for Lee and Watson.