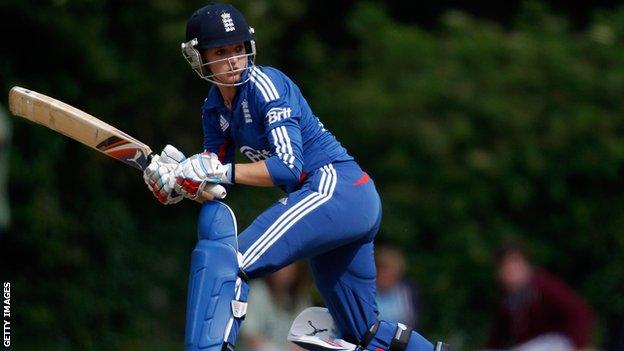 The women's one-day international series between England and India will go down to a deciding fifth match after the hosts won an entertaining fourth encounter by three wickets in Truro.

Sarah Taylor top-scored with 43 to help England chase down the target of 174 with an over to spare.

Eleven from the 49th over, including Katherine Brunt's six, secured victory.

Earlier, fifties from Mithali Raj and Harmanpreet Kaur gave India a good platform before they collapsed late on.

Taylor had set England on their way until the wicketkeeper was trapped leg-before by Niranjana, whose three wickets had England wobbling at 105-5 with 16 overs remaining.

Jenny Gunn then took charge at the Cornish venue with an unbeaten innings of 36 from 46 deliveries, sealing the win with a four after Brunt had cleared the boundary rope earlier in the same over.

"My job is to finish games off and I'm glad I managed to do it today," Gunn told BBC Cornwall.

"India are a good team and to go to 2-2 is an achievement for us. The next game is like a final and we do well in finals."

The final game of the series takes place at Wormsley in Buckinghamshire on Wednesday.