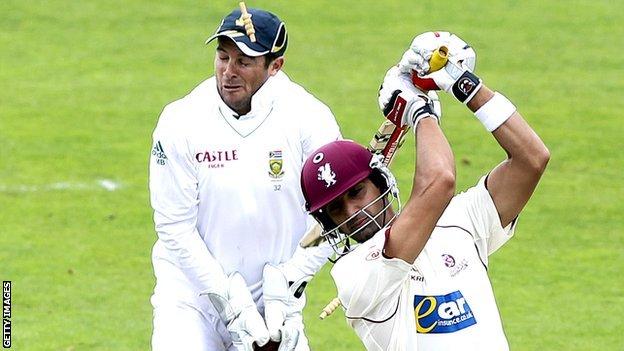 South Africa wicketkeeper Mark Boucher is a doubt for the Test series against England after suffering a serious eye injury.

The 35-year-old was struck by a bail while standing up to the stumps on day one of the tour match with Somerset.

He underwent surgery on a lacerated eyeball at 19:00 BST on Monday.

"It is a significant injury. I don't think he will be ready for the first Test, if the series," said South Africa team manager Dr Mohammed Moosajee.

"I would like to wait for the information the surgery gives us.

"A lot depends on whether there is damage to the retina, which allows us to see and focus. We won't know about that until after the surgery."

Boucher has played 147 Tests for South Africa and holds the record for most victims in the five-day format with 555.

He was not wearing a helmet when he was struck by the bail after leg-spinner Imran Tahir bowled Somerset's Gemaal Hussain.

Boucher, in his fourth tour of England with the Proteas, was treated on the field before being helped from the pitch, with AB de Villiers taking the gloves.

At the close of play, De Villiers wrote on Twitter: "Thinking of you Mark Boucher. Fight like never before my bud. We'll be there for you."

The first of South Africa's three Tests against England begins at The Oval on 19 July.

As well as the injury to Boucher, the tourists endured a challenging day at Taunton.

After reducing the home side to 32-4 - including Arul Suppiah and Nick Compton both run out without scoring - Graeme Smith's side had to endure a fifth-wicket stand of 183 between James Hildreth and Peter Trego.

Trego plundered 104 from only 63 balls, while Hildreth scored a century of his own before Somerset declared on 312-8.

The tourists then lost openers Smith and Jacques Rudolph cheaply, before Hashim Amla (35 not out) and Jacques Kallis (45 not out) took them to the close at 96-2.