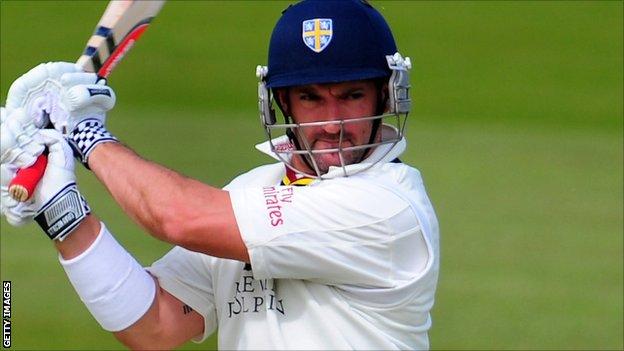 Batsman Michael Di Venuto has announced his retirement from county cricket after five years at Durham.

The 38-year-old has been limited to five first-class appearances in 2012, but was a key member of their 2008 and 2009 Championship title-winning sides.

"My body won't allow me to prepare and play the way I want," the Australian said of his decision to step down.

"I set high standards for myself and if I was to continue playing then it would be below these standards."

He added: "While I know I still have some quality short form cricket in me, the day in day out nature of first class cricket I physically can't do anymore."

"Michael has been a prolific run scorer for the club during his time here and is a much respected player, who will be greatly missed.

"He has proved to be a real inspiration on the field and the knowledge and guidance he has shared with our squad, especially the batsmen, has encouraged growth within the side.

"Michael should be incredibly proud of his time here at Durham and we wish him all the very best with his future endeavours."

As well as lifting the Championship in consecutive seasons, Di Venuto was a member of Durham's Friends Provident Trophy winning team that defeated Hampshire at Lord's in 2007.

He also enjoyed seven seasons at Derbyshire, as well as a year at Sussex.

The Tasmanian racked up 6,488 first-class runs and represented Australia in one-day international cricket, as well as Italy at Twenty20 level last summer.

"My time at Durham has been incredible," he added.

"To play with a great bunch of blokes in some history making teams is something that I will cherish and look back on fondly.

"My family and I have loved our time in the north east and have some wonderful memories to take home with us.

"I'd like to thank everyone involved with the club for making our time here so enjoyable. We will miss Durham CCC."